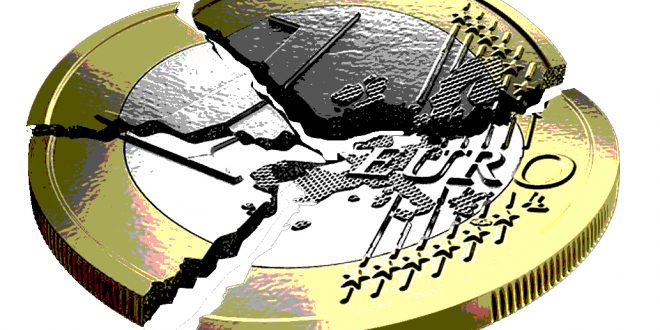 Bank of America “The Day after the Euro” predicts 7.5% depreciation of Greek Drachma

Should the eurozone fall apart and states return to their own currencies, the Greek Drachma would depreciate at 7.5% percent against the euro. This is the calculation of  a study published by the Bank of America. The study with title “The day after the euro” has been conducted by Athanasios Vamvakidis, a Greek economist.

According to the study findings, the Spanish currency would depreciate at 7 percent, the Portuguese currency at 1% and the French at 5 percent.

The Deutsche Mark would appreciate at 15%, the Irish currency +2.5 percent.

The calculations are based on the basic macroeconomic differences between Eurozone countries, however, in practice, the appreciation of the Deutschmark and the devaluation of the currencies of the Eurozone region may be significantly higher, according to Vamvakidis. He used the CGER-Method of the International Monetary Fund.

The Deutsche Mark will strengthen, maybe even higher than 15 percent.

“Currency developments in the periphery are also likely to overshoot, so that these currency depreciation will deteriorate much more rapidly in the short term,” the report notes.

The author,  , notes that the loose monetary policy of the European Central Bank will stop at some point in the near future and this will cause problems in many countries because of the high public debt of the eurozone member states.

The effect of the zero-interest policy is even more clear in the case of Italy. From 1670 billion in 2008, the debt rose to 2270 billion, but Rome now pays only 66 billion euro interest, whereas in 2008 it was still over 80 billion.

According to Vamvakidis, this would result in long-term risks for the euro. If interest rates rise again, many countries will again face problems. And these would increase if the Eurozone was hit by a shock of some kind that would bring its economy back into recession. “It is only a matter of time before the markets question the sustainability of the Eurozone again,” the economist predicts.

There is criticism against the savings policy of Germany. The study advises the state and the companies to invest considerably more in the country. “Because the policy of iron savings the domestic demand has been kept scarce, and this artificially increased Germany’s competitiveness – at the expense of other euro-member countries.”

As a result, the state would have to abandon its “black zero” policy and increase its debt to finance investments in roads, schools or public buildings. This would ultimately lead companies to invest more, according to Vamvakidis.

German conservative daily DIE WELT that published the report wonders why the Bank of America publishes such a report at a time when speculators predicting the end of the euro have lost a lot of money.

Athanasios Vamvakidis is  head of European currency strategy at the Bank of America. Among his previous positions he was is the Resident Representative of the IMF in Croatia.

PS If the euro falls apart, what is the point of calculating the loss or the increase of value of the national currencies with respect to Euro and not the US Dollar?