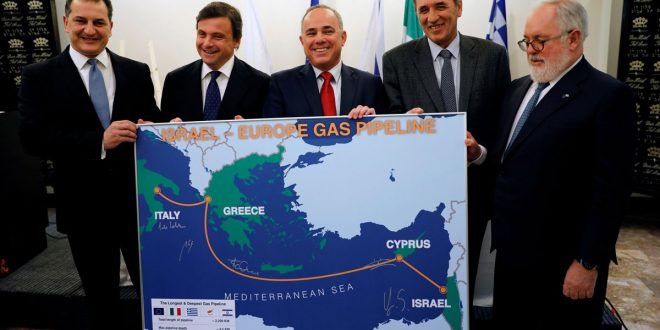 Energy ministers from Greece, Cyprus, Italy and Israel signed an agreement on natural gas pipeline in Tel Aviv on Monday. The proposed 2,000 kilometer subsea pipeline would connect gas fields offshore of Israel and Cyprus with Greece and possibly Italy.

Aiming to transform the Eastern Mediterranean into a regional energy hub, Israeli and European officials signed a joint declaration on Monday to promote construction of the world’s longest subsea natural-gas pipeline.

“This is the beginning of a wonderful friendship between four Mediterranean countries – Israel, Cyprus, Greece and Italy,” National Infrastructure, Energy and Water Minister Yuval Steinitz said at a press conference in Tel Aviv. “This is going to be the longest and deepest subsea gas pipeline in the world. It’s a very ambitious project.”

If all proceeds as expected, the ministers hope to see gas flowing through the pipeline by 2025.

“We strongly support the development of the region as a future gas supplier,” said European Commissioner for Climate Action and Energy Miguel Arias Cañete. “It is clear that the potential resources of this region are very significant.”

The EU currently receives its gas primarily from Russian and North Sea reservoirs – the latter of which are rapidly depleting. Europe could provide an attractive outlet for Eastern Mediterranean gas for decades to come due to its stable market for investors and geographical vicinity to the supplier, Cañete explained.

“We support the East Med project and look forward to the rapid completion of the study phase,” he said.

Cañete expressed his confidence that the plans would meet commission requirements and receive further financial backing for continued research but acknowledged that the European Commission cannot yet make definite commitments.

Because the pipeline is considered an EU Project of Common Interest, the European Commission co-financed the project’s feasibility study, which was conducted by gas infrastructure developer IGI Poseidon – a 50-50 joint venture of Italian energy company Edison and the Greek DEPA Group.

Italian Economic Development Minister Carlo Calenda said the pipeline is a priority project for his country as Italy works to phase out coal and build up a secure natural gas supply.

Greek Environment and Energy Minister Giorgos Stathakis emphasized the importance of not only diversifying gas sources, but also ensuring the security of supply.

“As a transit country and because of its geographical position, obviously, Greece has a central role in this diversification process,” Stathakis said.

As both a transit country and gas producer for the potential pipeline, Cyprus also has much to gain from partaking in this ambitious project, according to Cypriot Energy, Commerce, Industry and Tourism Minister Yiorgos Lakkotrypis.

espite the expensive and complicated nature of the project, the ministers expressed confidence that private companies such as IGI Poseidon would deem the plans an attractive investment. (full article JerusalemPost)