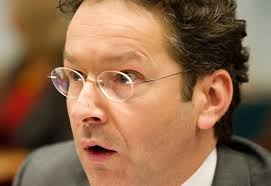 Dijsselbloem fails to win even German support to complete mandate

A new president of the Eurogroup could be elected by the summer break, as the controversy surrounding Jeroen Dijsselbloem has almost put paid to any chance he had of completing his mandate once a new Dutch government is formed. Remarks by Dijsselbloem that southern countries blew money on drinks and women were unacceptably “racist and sexist”, EU Parliament head Antonio Tajani said.

Dijsselbloem, the Netherlands’ acting finance minister, has almost no chance of remaining head of the Eurogroup once Dutch politicians reach an agreement following the country’s national elections, a European source with knowledge of this topic revealed.

The election of a new candidate could happen in May or June, the official added.

Public outcry in several national governments and in the European Parliament, triggered by his comments about Southern member states, made his situation untenable, his critics say.

The situation worsened after he ruled out speaking in front of the European Parliament’s plenary today (4 April) to discuss the Greek bailout programme.

Parliament President Antonio Tajani announced he would send a letter of formal protest to Dijsselbloem. French liberal MEP Alain Lamassoure proposed declaring him “persona non grata”, prompting a round of applause among his colleagues.

Dijsselbloem hoped he could remain in the post until his mandate ends in January 2018. He said after the last Eurogroup in March he would sound out eurozone finance ministers about his future.

But he would not find support among his main backers, in particular Germany.

Chancellor Angela Merkel championed his candidacy when he was elected in Januray 2013.

Now, it seems Berlin would not be ready to support the Dutch politician up to early 2018, sources told EURACTIV.

But German Finance Minister Wolfgang Schäuble would not insist on nominating a new president before the second review of the Greek programme is concluded.

However, once the arduous process is completed, Berlin would be ready to let Dijsselbloem fall on his sword.

The Dutchman is fighting tooth and nail to continue chairing the euro club even once a new finance minister takes over back in his home country.