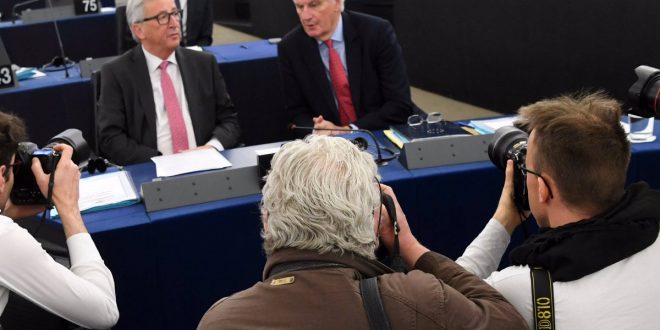 The European Commission launched a Brexit website with useful information, latest news and contact possibilities. The website will include everything from the latest speeches to official documents as they are published.

The sub-section of the wider Commission website for now has a limited array of content but includes an organization chart and directs users to the Twitter account of Michel Barnier, the EU chief negotiator, for the latest news.

According to Politico.eu, the Brexit website makes a clear hierarchical distinction between Barnier and his deputy Sabine Weyand, and the other 27 staff members listed on the task force organization chart.

The Commission internally refers to its Brexit taskforce as “TF50” and suggests that inquiries about its work be sent to a general email address.

The website includes Latest News, Q&A and other useful information.

Article 50 of the Treaty on European Union – Q&A

So how long does that leave for the actual negotiations?

The negotiations themselves will last approximately 18 months (early June 2017 – October/November 2018).

Who will negotiate for the European Union?

The Heads of State or Government of the EU27 invited the Council to nominate the European Commission as the Union negotiator. They welcomed the appointment by the Commission of Michel Barnier as the chief negotiator.

Michel Barnier will keep the European Parliament closely and regularly informed throughout the negotiations.

It is clear that Member States will be closely involved in preparing negotiations, giving guidance to the Union negotiator, and assessing progress. For this purpose, a dedicated Working Party will be created in the Council, with a permanent chair, to ensure that negotiations are conducted in line with the European Council guidelines and the Council’s negotiating directives.

The European Council will remain permanently seized of the matter, and will update its guidelines during the negotiations as necessary.

What about the practical side of the negotiations? What language will they be in? How often will both sides meet?

Practical issues, such as language regime and negotiation structure, will be agreed jointly between the EU and UK negotiators.

Where will negotiations take place?

They will take place in Brussels.

When does the United Kingdom cease to be a member of the European Union?

The EU Treaties cease to apply to the United Kingdom from the date of entry into force of the agreement, or within 2 years of the notification of withdrawal, in case of no agreement. The Council may decide to extend that period by unanimity.

Until withdrawal, the Member State remains a member of the European Union, with all the rights and obligations that derive from membership, including the principle of sincere cooperation which states that the Union and all its Member States shall assist each other in carrying out the Treaty.

What happens if no agreement is reached?

The EU Treaties simply cease to apply to the UK two years after notification.

Can a Member State apply to re-join after it leaves?

Any country that has withdrawn from the EU may apply to re-join. It would be required to go through the accession procedure.

Once triggered, can Article 50 be revoked?

It is up to the United Kingdom to trigger Article 50. But once triggered, it cannot be unilaterally reversed. Notification is a point of no return. Article 50 does not provide for the unilateral withdrawal of notification.

What does Article 50 say?

1. Any Member State may decide to withdraw from the Union in accordance with its own constitutional requirements.

2. A Member State which decides to withdraw shall notify the European Council of its intention. In the light of the guidelines provided by the European Council, the Union shall negotiate and conclude an agreement with that State, setting out the arrangements for its withdrawal, taking account of the framework for its future relationship with the Union. That agreement shall be negotiated in accordance with Article 218(3) of the Treaty on the Functioning of the European Union. It shall be concluded on behalf of the Union by the Council, acting by a qualified majority, after obtaining the consent of the European Parliament.

3. The Treaties shall cease to apply to the State in question from the date of entry into force of the withdrawal agreement or, failing that, two years after the notification referred to in paragraph 2, unless the European Council, in agreement with the Member State concerned, unanimously decides to extend this period.

5. If a State which has withdrawn from the Union asks to re-join, its request shall be subject to the procedure referred to in Article 49.

PS something very practical by the EU Commission for a change…