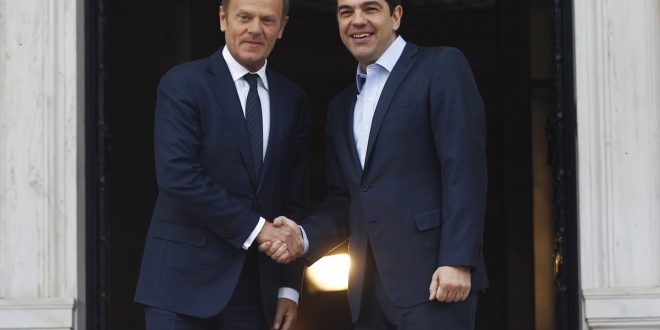 Greek Prime Minister Alexis Tsipras called for an emergency Summit of the Eurozone member states before Easter, should there be no agreement between Greece and its European creditors at the Eurogroup meeting on upcoming Friday, April 7, 2017. The Prime Minister revealed that he already asked European Council President Donald Tusk to take the relevant initiative.

At a joint press conference with European Council President Donald Tusk in Athens, Tsipras said that he will call for an emergency EU Summit before Easter should the talks on the second review of the current Greek program stall this week.

“Every time we are close to an agreement with the institutions, some table additional demands and violate those already agreed.”

Even today, some of the creditors continue to be unrepentant. After the delays in the first review, because of unnecessary additional measures required for 2018, they are repeating the same delay policy.”

“We are not playing a game here; we are playing with the future of a whole nation,” Tsipras  underlined adding that he shared the same view with Tusk that “we are very close to an agreement.”

However, if an agreement is not reached at the Eurogroup on Friday, then initiatives at a higher level must be assumed.

“Our aim is to have some results before Easter,” he said adding that “every day of delay has an impact on the Greek economy.”

“We are not willing to observe any more games against the Greek people and Europe’s prospects,” he underlined.

“I told Mr. Tusk that is a common belief in Greece that every time we approach the end of negotiations. Both the government and I will not tolerate any more games against the Greeks, ” Tsipras underlined.

Tsipras revealed that he has already asked Donald Tusk to take the initiative and call for an emergency Summit of the Euro-zone countries “if no white smoke at the Eurogroup on Friday,” as he said characteristically.

“I expressed my concern to Mr. Tusk about the course of negotiations and pointed out that if there is no immediate solution, then there should be a discussion at the highest political level of the EU, in an extraordinary Summit of the Eurozone. These endless negotiations should immediately finish,” Alexis Tsipras said.

“All member states need to assume their responsibilities in order to keep Europe united and safe,” the Prime Minister underlined.

On his part, Donald Tusk,  said the usual non-biding staff and praised Greeks for their “tireless and persistent efforts to overcome the crisis.”He said also he noticed significant improvement in economy since his last visit to Greece.  However, he made clear “we are still far away from talking about a success story in the Greek economy.”

The EUCO president stated “Thanks to the determination and the realism shown, we are very close to concluding the second review.”

He said “every day we get closer to an agreement. We hope that we will be able to reach an agreement at the Eurogroup on Friday.”

Meeting on #Greece with institutions and Greek government finished: we made good progress, talks will continue on Wednesday

PS of ‘progress’ we hear, of ‘tireless efforts’ but agreement we do not see.