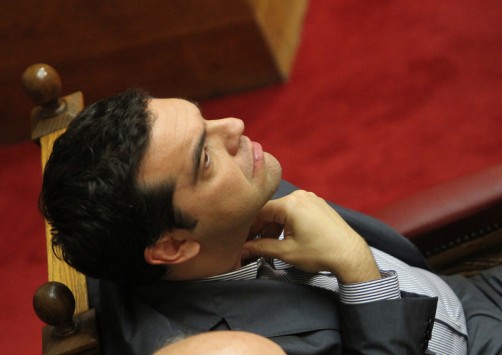 Greek Prime Minister Alexis Tsipras said Wednesday evening he doesn’t think a Euro Summit will be necessary. A couple of hours earlier, he had said that he will call for an emergency EURO Summit before Easter should the talks on the second review of the current Greek program stall at the Eurogroup meeting on Friday. The Greek Prime Minister was thinking that a political solution would bring the negotiations stalemate to end.

During a joint press conference with European Council President Donald Tusk in Athens, Tsipras revealed that he had already asked Donald Tusk to take the initiative and call for an emergency Summit of the Euro-zone countries “if no white smoke at the Eurogroup on Friday,” as he said characteristically.

He sharply criticized the delays to conclude the second review of the current Greek program saying “we are not playing games, here, we play with the future of a whole nation.”

“Every time we are close to an agreement with the institutions, some table additional demands and violate those already agreed,” Tsipras said adding “Even today, some of the creditors continue to be unrepentant. After the delays in the first review, because of unnecessary additional measures required for 2018, they are repeating the same delay policy.”

Wednesday evening, and when asked by state broadcast ERT whether to convene an extraordinary session on the Greek program, Tsipras replied “I don’t think so.”

Did Donald Tusk persuade Tsipras that his plan would bring nothing? Or did he promise to intervene to German Finance minister Wolfgang Schaeuble for a positive outcome?

The teleconference between Greece and the creditors scheduled for Wednesday evening was cancelled at the last minute. One of the institutions representatives could not attend. Did the IMF boycott the conference call? Or was it the German finance minister who called them off and ordered them to be stand by until he decides what to do with his obsessed idea called The Greek Nightmare?

Schaeuble is meeting Eurogroup head Jeroen Dijsselbloem  in Berlin today Thursday, a day before the crucial Eurogroup. Wolfgang Schaeuble wants to instruct the Eurogroup chief  on what to with Greece. Most probably, Schaeuble will first read and evaluate the latest public opinion polls in the middle of the German elections campaign.

The rest is history, no matter how the Greek side tries to meet creditors’ demands, accepting measures to be implemented in 2019 with further pension cuts and broadening the tax-free base at 5,600-6,000 euro annual income – which in EU standards means “taxing the poor.”