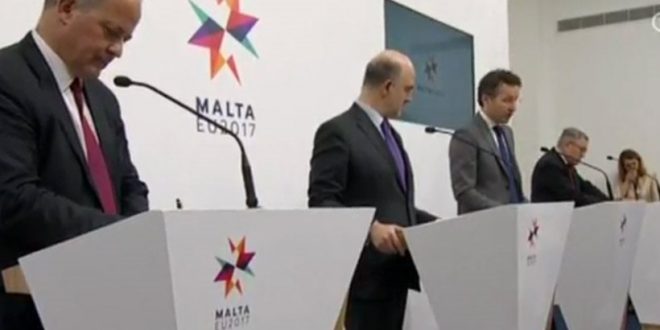 Creditors representatives will return to Greece as early as possible to finalize the second review of the Greek bailout program. At a press conference after the Eurogroup meeting, Jeroen Dijsselbloem, said that Greece and creditors have reached a ‘great agreement’ in Malta.

The total amount of these two measures is 3.6 billion euros.

The tax-free threshold is yet to be determined, reports of the week were saying creditors – in fact the IMF- wanted it down to 5,600-6,000 euro annual income gross.

He implied that the creditors also agreed with Greece on “counter-measures”, which Athens wants in order to spend if primary surpluses have been reached.

The final decision will be at the next Eurogroup, Dijsselbloem said.

The Greek government wants to spend the money to benefit the society.

Euro zone finance ministers have gathered in Malta on Friday in an effort to break a deadlock over Greece’s bailout, after meetings in Brussels and Berlin this week failed to reach an agreement that will pave the way for about €7 billion in aid for Athens.

Eurogroup head Jeroen Dijsselbloem said before entering the meeting, he was “in a positive mood” about a breakthrough. “we have worked intensively during the last weeks, we have achieved some results.”

EU Commissioner Pierre Moscovici: “Today’s Eurogroup is important because everyone must be committed to agree on the parameters of a good agreement.

European Commission Vice President Vladis Dombrovskis: ” I  hope for progress at the Eurogroup, the parameters must taken into consideration.”

German finance Minister Wolfgang Schaeuble:“We have covered the largest part, an agreement will need a few more days. The projections of the IMF with regards to the Primary Surplus are a little more pessimistic than the ones of the Commission.”

The best I heard so far coming from Valletta is this

German FinMin #Schäuble says he isn’t blocking agreement with #Greece. Anyone who says so is spreading #FakeNews. #Malta #Eurogroup

The government in Athens is awaiting for the official statement at the end of the Eurogroup meeting.

Greek government spokesman Dimitris Tzanakopoulos: ‘If everything goes well in today’s  Eurogroup we may conclude all procedures for the second review by end of the month.”

Greece and its international creditors have been wrangling over key economic overhauls that would allow bailout supervisors to return to Athens to conclude the second review of the Greek program and unlock the next tranche of bailout cash.

Return of the creditors representatives in Athens is essential to achieve the staff level agreement.

Talks between the government of Prime Minister Alexis Tsipras, European creditors and the International Monetary Fund have been stalled for months. One day,  the problem is the IMF’s participation, the other day the problem is the implementation of the additional austerity measures.

Two days ago, Prime Minister Alexis Tsipras warned that “the game of delays is over” and that “an agreement must be reached within April.

Of course, we will have to see what the IMF thinks about this agreement and start a new round of argument and delays…

Why pensions will have to undergo further cuts and why Greece’s poor will have to be taxed that’s another question.

Greece’s draft state budget for 2023 is expected to be finalized this coming week, before …