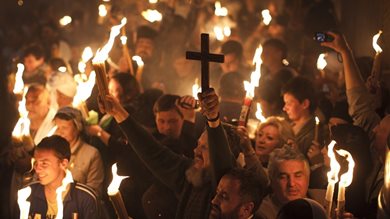 It was first SYRIZA lawmaker Makis Balaouras, who claimed the Holy Light was a “pagan residue”. A couple of days later, the parliamentary spokeswoman of SYRIZA, Foteini Vaki described the Holy Fire as a “fake miracle.”  The debate about the transfer of the Holy Light from Jerusalem and the official ceremony with honors appropriate to a state leader sparked a serious conntrontation within the coalition government parties: left-wing SYRIZA and nationalist conservative Independent Greeks.

It is not the first time, SYRIZA lawmakers challenge the Holy Light transfer which is estimated to cost 25,000 euros.

Vaki and Balaouras had submitted a relevant question to the Parliament already in May 2015, the first Easter time SYRIZA was in power.

“The question is part of the general debate on the issue of relations between the Church and the State,” Vaki told a Greek daily on Holy Thursday. “The parliamentary question expressed reservations as to the feasibility, and asked the ministers in charge also about the economic dimensions of the state participation in the transfer process,” she added.

The Holy Light arrives from Jerusalem to Athens Airport with a special flight at 6:30 p.m. on Holy Saturday.  Ministers line up, a red carpet is rolle dout, a military band plays. From there aother aircraft carry the Light to main to main parishes across Greece. From there small parishes receive the Holy Light and present it to believers at midnight when Greeks celebrate the Resurrection of Jesus Christ.

Independent Greeks leader and Defense Minister Panos Kammenos was quick to dismiss any attempt to halt the custom and stressed “As long as we are in the government we will welcome the Holy Light with honors appropriate to the leader of a state, as provided by the Greek Constitution.”

“The Holy Light will come as every year,” Kammenos made very clear.

According to Greek Orthodox traditions, the Holy Light is a miracle that happens once a year, on the day before Pascha, the Orthodox Easter.

A blue light emanates within Jesus Christ’s tomb.  It is said that the light rises from the marble slab covering the stone bed believed to be that upon which Jesus’ body was placed for burial.

The Patriarch goes alone in the Holy Sepulchre, the small chapel. He wears a plain white robe and holds two candles. The clergy has previously secured that he has no lighter, matches or anything else with which he could light the candles he holds.

Prime Minister Alexis Tsipras who is a declared atheist stayed out of the debate.

Foreign Minister Nikos Kotzias said the debate over the transfer from Jerusalem to Athens was “unnecessary”. Such confrontation “has deep political content and clear communication target,” the foreign minister said adding that “populist exploitation of religion for political or personal gain is unacceptable.” To be progressive cannot be measured with hits to the heart of the people’s traditions.

No matter whether the Holy Light comes form a miracle or not, millions of Greeks enjoy the custom and rush to churches ten minutes before midnight on Holy Saturday. The priest and the clergy com out the church with the Holy Light, clergy and people chant several times  “Χριστός Ανέστη εκ νεκρών…” “Christ is Risen from the Dead”, thousands of fireworks explode, the clergy and the people chant… Ten minutes after midnight, the majority of people leave the church with lit candles and bring the Holy Light to their homes.

Mean scientists claim that the Patriarch’s candles in the Holy Sepulchre in Jerusalem are soaked in white phosphorus and they spontaneously ignite after 20 minutes due to the self-ignition properties of white phosphorus when in contact with air.