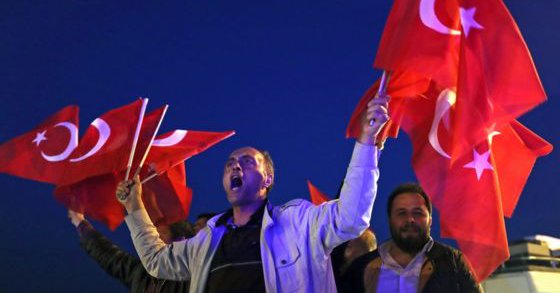 An observer mission that has been monitoring the Turkish referendum campaign and vote on expanding presidential powers says the procedures used “fell short” of international standards. The criticism was raised by the Organization for Security and Cooperation in Europe (OSCE) with reference to referendum voting and counting of ballots.

The observers also expressed concerns about a decision by the electoral commission to count ballots which did not carry an official stamp. The Supreme Electoral Council (YSK) changed the rules and accepted as legitimate ballots without officials stamps after the counting started on Sunday afternoon.

Tana de Zulueta of the OSCE said Monday that a Turkish electoral board decision to allow as valid ballots that did not bear official stamps undermined important safeguards against fraud.

The monitoring group described a series of irregularities in the referendum, including a skewed pre-vote campaign in favor of the “yes” vote, intimidation of the “no” campaign and the fact that the referendum question was not listed on the ballot.

De Zulueta also said the campaign was imbalanced due to the involvement of leading local and national officials on the “yes” side.

“We observed the misuse of state resources, as well as the obstruction of ‘no’ campaign events. The campaign rhetoric was tarnished by some senior officials equating ‘no’ supporters with terrorist sympathizers,” de Zulueta added.

The 16 April constitutional referendum in Turkey was contested on an unlevel playing field, and the two sides in the campaign did not have equal opportunities, the international observers concluded in a statement released today. While the technical aspects of the process were well administered, voters were not provided with impartial information about key aspects of the reform, and limitations on fundamental freedoms had a negative effect, the statement says.

“On referendum day there were no major problems, except in some regions, however we can only regret the absence of civil society observers in polling stations,” said Cezar Florin Preda, Head of the delegation from the Parliamentary Assembly of the Council of Europe. “In general, the referendum did not live up to Council of Europe standards. The legal framework was inadequate for the holding of a genuinely democratic process.”

“The referendum took place in a political environment in which fundamental freedoms essential to a genuinely democratic process were curtailed under the state of emergency, and the two sides did not have equal opportunities to make their case to the voters,” said Tana de Zulueta, Head of the ODIHR limited election observation mission.  “Our monitoring showed the ‘Yes’ campaign dominated the media coverage and this, along with restrictions on the media, the arrests of journalists and the closure of media outlets, reduced voters’ access to a plurality of views.”

Although the Supreme Board of Elections (SBE) adopted regulations and instructions to address some aspects of the process, the legal framework, which is focused on elections, remained inadequate for the holding of a genuinely democratic referendum, the observers said. Provincial governors used state-of-emergency powers to further restrict the freedom of assembly and expression.

“A state of emergency should never be used to undermine the rule of law,” Preda said.

The legal framework for the referendum neither sufficiently provides for impartial coverage nor guarantees eligible political parties equal access to public media, and gives preference to the ruling party and the president in the allocation of free airtime, while the SBE’s authority to sanction for biased coverage was repealed, the statement says.

The law limits full participation in the referendum to eligible political parties and does not regulate the involvement of other stakeholders, the statement says. Further, the SBE decided that civil society organizations and professional associations were not permitted to hold campaign events.

“The campaign framework was restrictive and the campaign imbalanced due to the active involvement of several leading national officials, as well as many local public officials, in the ‘Yes’ campaign,” de Zulueta said. “We observed the misuse of state resources, as well as the obstruction of ‘No’ campaign events. The campaign rhetoric was tarnished by some senior officials equating ‘No’ supporters with terrorist sympathizers, and in numerous cases ‘No’ supporters faced police interventions and violent scuffles at their events.”

Referendum day proceeded in an orderly and efficient manner in the limited number of polling stations visited by international observers. In some cases, access for ODIHR observers during the opening and voting in polling stations was either denied or limited. Police presence was widely reported both in and outside polling station and, in some cases, police were checking voters’ identification documents before granting access to the polls. The SBE issued instructions late in the day that significantly changed the ballot validity criteria, undermining an important safeguard and contradicting the law.

Unofficial results have shown a narrow win for President Recep Tayyip Erdogan, who had advocated the ‘yes’ vote.

Tana de Zuleta OSCE said the procedures “fell short of full adherence” to the standards Turkey has signed up for.

So far, there was no official reaction from Turkey.

However, President Recep Tayyip Erdogan continued his anti-European campaign and after the referendum apparently in an effort to unite his divided country waving the tomahawk of nationalism.

Addressing supporters at Ankara airport Monday on his arrival from Istanbul, Erdogan said he was “attacked” by nations with the “crusader mentality” as well as by their supporters inside Turkey.

He added that he was forced to put a tough fight against the “powerful nations of the world” who opposed his campaign for a yes vote.

It was not clear if he was aiming at European nations, including Germany and the Netherlands, where authorities restricted government ministers’ plans to hold campaign rallies to court Turkish expatriate votes.

A preliminary vote count showed Turkey voting 51.2 percent in favor of changing the country’s constitution to give the president vastly expanded powers.

Already on Sunday, Turkish opposition parties cried foul and fraud and said a day later, that they will officially ask for recounting of 60 percent of the ballots.