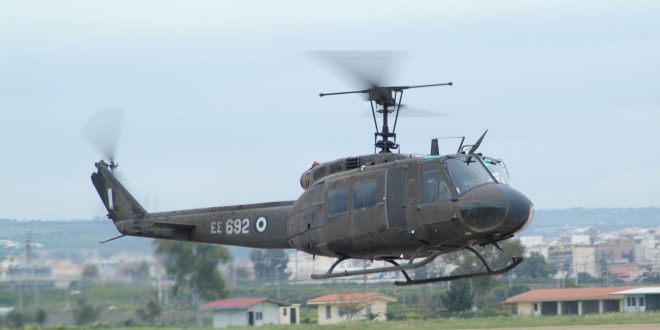 A military helicopter UH-1 with five people on board has gone missing in central Greece. the incident has set on alert the Greek Armed Forces, a huge search operation has been launched with the participation of the Army, the Air Force and the fire brigades.

According to a statement issued by the Army General Staff, the helicopter type Huey (UH-1H) disappeared form the radar at 07:50 a.m. on Wednesday morning.

The signal of the military helicopter disappeared over Sarantaporo mountain in central Greece.

The helicopter UH-1 has left a military base in Athens in the morning with a crew of three. Two high-ranking officers went on board in Larissa, where also a NATO base is located. It destination was Kozani, its mission the inspection of the northern borders of Greece.

The helicopter was scheduled to reach its destination at 9:50 a.m. after a short halt in Larissa for tanking and to get the two officers on board.

According to latest information, Super Puma helicopters participating in the Search and Rescue operation have located the missing helicopter UH-1 in the mountainous area of Sarantaporo – Elassona. the elevation is 840 m. According to local Kozanimedia.gr, SAR teams have located a seriously injured crew member, a woman. an ambulance is transferring her to hospital.

In a statement the Greek General Staff announced that the pilot, the co-pilot and two passengers were found dead. A female crew member, the engineer, had survived the crash. She is reportedly taken to military hospital in Thessaloniki, her life is not in danger.

Major Dimosthenis Goulas, 35. Had 1650 flight hours in helicopters of this type

It is too early to speculate about the reasons for the accident. It is not clear yet whether the helicopter fell or crashed on the mountainous area.

The helicopter debris were found near the highway Kozani-Larissa.

A military committee investigates the causes for the helicopter crash, whether a technical defect or a human error.

Eye witnesses told state ERT TV, that they heard an helicopter flying low, within minutes there was a power outage in the area. There is suspicion that the helicopter was caught on power cables.

There was fog and limited visibility in the area on Wednesday morning.