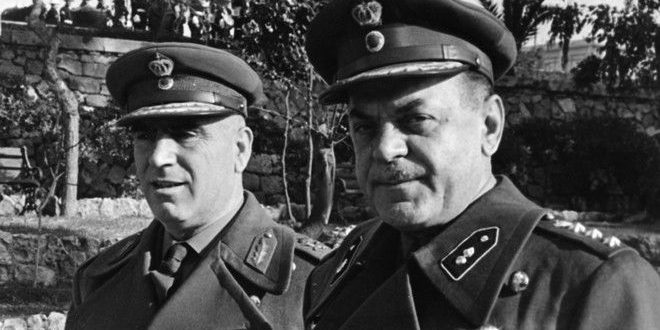 The Economic Scandals of the Greek Military Junta (21 April 1967)

21. April 1967: the Dark Day, when tanks rolled through the streets and the colonels imposed the dictatorship that lasted seven years. Fifty years have passed since that day, and the political narrative after 2012, i.e. when Golden Dawn started to rise, spread the fiction of the ‘economic miracle’ through the years of the military junta. A junta that oppressed any democratic values, sent thousands to exile and torture.

The paradox is that this claim, the praise of  the ‘economic miracle’ of the junta is not based on evidence. On the contrary: it lacks any basis whatsoever. the economic scandals of the colonels were never seriously investigated. Several Greek economists tried to put things in the right perspective.

Yangos Pesmatzoglou: “The fight against poverty was exhausted in the write-off of farmers’  debts.”

Those praising the write-off of farmers’ debts “forget” that agricultural production was derailed during the dictatorship, that the rural income per capita sank, that hundreds of thousands of workers migrated. The colonels had to search cheap labor forces in Africa, the import of agricultural products increased to unprecedented levels.

The farmers’ debt write-off was aiming to limit the reactions to the junta.

Half a million Greeks left the country during 1968-1972. This led also to artificial reduction of unemployment rates.

The trade deficit in the same period increased five times.

Rural economy grew by only 1.8% in seven years, while the colonels forecast in 1968  was a “5.2% growth over a horizon of five-year horizon.

Throughout the 1960s, inflation in Greece had “the lowest inflation rate in all OECD countries.” During the junta, the consumer price index rose 15.3% from 1972 to 1973, and 37.8% in the following year, especially in basic goods and healthcare. Real wages declined by 4 percent.

Household taxes amounted 91% of the total taxes. Corporate taxes fell, while the tax burden fell on the ordinary workers.

The current account deficit has more than double between 1967 and 1972: the balance of payments showed a surplus of $ 14.6 million over the period 1960-1966. the average deficit became $ 117 million in the seven years of the junta.

Expenditure on education declined from 11.6% to 10% of all government expenditure, while expenditure for defense spending and “public security” increased.

Infrastructure works where the contracts were given to colonels’ relatives and friends , were financed with issuing of bonds,. Construction companies would borrow from foreign banks abroad yet with the guarantee of the Greek state.

As a consequence, the loans would burden the state, the borrowing would change character from “external” to “domestic”.

The National Vow – the biggest scandal ever The Prime minister briefed on the Church of Savior

In the colonels’ vision the so-called National Vow, the church, should be construction on the Tourkovounia mountains in the eastern Attica.

The colonels dreamed of a “majestic temple” that would be the third third wonder of architectural construction in Athens after the Parthenon of Classical Greece and the Lycabettus of the byzantine period.

The project never materialized but colonels, the church, academics and a large number of other actors started to collect donations. Of course, the majestic project should be financed with people’s money. A Special Fund was established.

A total of 453.3 million Drachmas were collected mainly through state and private contributions, ‘subsidies’ form the state budget and loans. Not even one single brick was ever laid on the Tourkovounia mountains.

Due to internal conflicts within the dictators, the Special Fund was forced to reveal the stand of things in January 1974. The revelations did not surprised many.

Just 47.3 million Drachmas were in the Fund.

The remaining 406 million had traveled abroad, to other countries and places.

None was ever punished for this fraud.

Another scandal was the construction of Egnatia highway in Northern Greece. The colonels launched the 150-million drachma ‘project’ in 1969. The real construction works started 20 years after the fall of the junta in 1994.

Several ‘US companies’ had millions and millions of Drachmas disappear for the sake of infrastructure projects that never or were very little materialized. Greek -American businessman Tom Pappas had secured million-drachmas projects. He was supporter of the junta, had close relations with then US President Richard Nixon and Vice Spyro Agnew. In other activities, the colonels promoted their own brother to high-ranking positions, gave loans to relatives and friends and whoever they considered a supporter. They rushed to legislate the exemption from customs fees in the fields of shipping, industry, trade and tourism operations “especially those controlled by foreign companies.”

They secured benefits for themselves and their families.

Full report The economic crimes and scandals of the Junta here

PS some private observations:  a few years ago – in 2012 or 2013 -I was indeed surprised to hear taxi drivers praising the economic miracle of the colonels. The chat would start out of the blue or with the usual “ah, Greek economic crisis….”. I was stunned to hear about the write-off of the farmers’ debts. It was something I had no idea about. Of course, I was surprised to hear young men speaking about such an issue that had apparently escaped my knowledge. The crisis was at its peak, the Golden Dawn was gaining voters and had strongly infiltrated the taxi sector. In the years before the crisis, I remember very well, that majority of taxi drivers would praise the center-right – at least in Athens. But suddenly, one would see more and more taxi drivers in Athens with their hair shaved. a trademark of GD.

After the murder of Pavlos Fyssas and the GD persecution by Samaras’ government, the taxi drivers started to grow hair again. One could not see at first glance whether they were supporters or not. But the rhetoric remained….