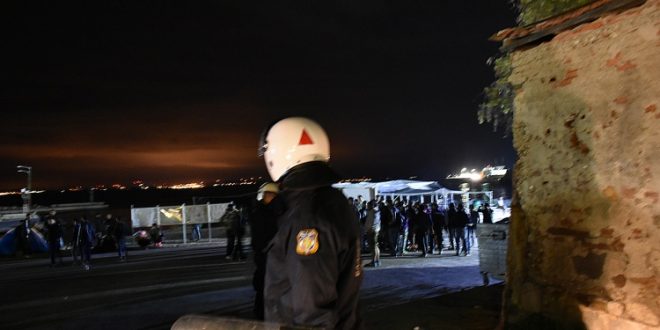 Two people belonging to the far-right political spectrum have been arrested and taken to the prosecutor. They are accused of attacking refugees in the surrounding area of ​​ the hot spot of Souda on the island of Chios.

The two were identified by their victims, while one of them was being transferred to hospital to receive first aid for injuries.

They face charges for ‘unprovoked assault and physical injury’. In addition, resistance to authority, slander and threat during his arrest.

According to local media, the two were involved also in throwing stones at the Souda hot spot, together with other extreme right-wingers.

Earlier, they had mingled with resident protesting plans of  the Spanish NGO Salvamento Maritimo Humanitario (SMH) to establish an Information and Care Center for refugees and migrants.

Residents of Agia Anna Kapela had gathered outside the town hall while the Municipality Council was voting to adopt the NGO’s proposal.

A member of local public sector union ADEDY and of Communist Party KKE told the council that he was reviled while entering the town hall.

Local media report of tension in the area and fears of provocations.

In an incident Thursday night, residents ‘patrolling’ neat Souda  caught five migrants and brought them to police station claiming that they were responsible for smashing two cars in the city.

Police was not able to locate the ‘damaged cars’ though.

Later, these ‘residents’ who kept patrolling in the area, were taken to police station. they were reportedly involved in violent and provocative incidents. Police investigates their involvement in the ‘cars incident.’

Inside the refugee camp, the residents had started to collect sticks and stones in order to reply to a possible attack.

A police operation diffused the tension, squads were deployed in and outside the camp until 3 o’ clock in the morning.