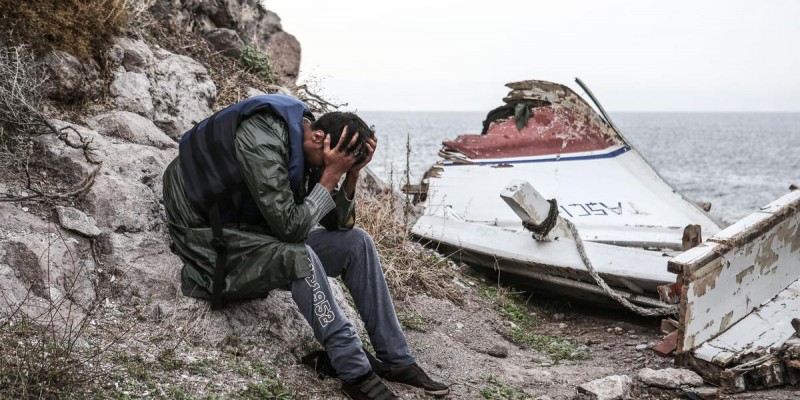 April 24, 2017 Refugees Comments Off on At least 16 dead when boat with refugees capsizes in the Aegean Sea 2,286 Views

At least seven people have drowned when a boat carrying refugees capsized in the Aegean Sea on Monday morning. Two women have been rescued, one of them is in advanced pregnancy. Unconfirmed reports speak of another four bodies to have been washed out on the Turkish coast. A Search and Rescue operation with Greek Coast Guard, Frontex and fishermen vessels is underway, off the coast of Molyvos on the island of Lesvos. There are fears that the number of dead will increase.

The number of dead is increasing by hour. The bodies of two men, two women and one underage child were first found floating in the waters. Any effort by rescuers to bring them back to life were in vain. Later, one more body was found floating.

The pregnant woman rescued by the coast guard is in critical condition. She is reportedly in shock, unable to speak and give information about the number of people on board. She was taken to the hospital in Mytilene, doctors struggle to stabilize her health condition.

Private ANT1 TV reported that it was the Turkish Coast Guard that informed its Greek counterpart about the capsized boat.  The network did not confirm reports that four more bodies were washed out at the Turkish coast.

It is not known how many passengers were on board and when the boat left the Turkish coast.

The number of dead is increasing by hour. According to local media on the island, seven bodies have been recovered by 1:30 pm, while three more bodies have been spotted. The tragedy became known around 12 o’ clock noon.

It is estimated the boat was carrying 25 refugees and that it boat capsized Sunday night.

It is not confirmed whether indeed the capsized boat was reportedly spotted off  Eftalou beach in the area of Molyvos, in the North-West of the island.

In the area, wind is blowing with intensity of 4 Beaufort.

+++ 16:30 number of dead increased to 16. Nine bodies were found in Greek territorial water, seven in Turkish waters. Among the dead in Turkey are six men and one boy.

The Search and Rescue operation continues.