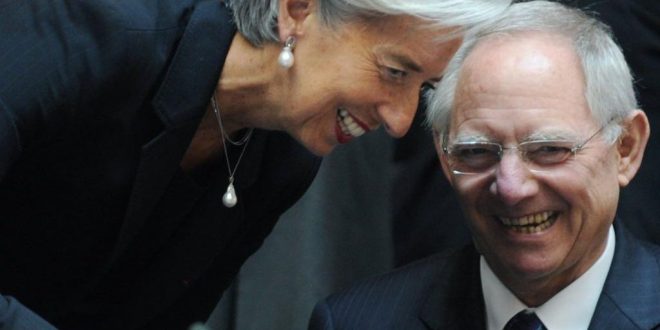 Greece and foreign creditors resume talks on Tuesday afternoon after a long break. On the table are the so-called “reforms” prescribed under the international bailout and further debt relief. The aim is to reach a comprehensive deal (staff level agreement) before the Eurogroup meeting on May 22.  Talks are over reforms in the energy and labor market, privatizations, pension cuts and income tax. The talks have dragged on for months mainly due to differences between EU lenders and the International Monetary Fund over Greece’s fiscal targets and debt sustainability..

Before they creditors’ representatives sat at the same table with the Greeks, they rushed to write down their demands and sent to Greek Finance ministry two drafts: one refers to the demands of the European lenders (EU commission, MoU), the other to those of the International Monetary Fund.

The Memorandum of Understanding (Memorandum of European Institutions), a text of 51 pages,  arrived at the Finance Ministry yesterday Monday just before noon. The Memorandum of Economic and Financial Policies of the International Monetary Fund was sent after 5 o’ clock in the afternoon.

The long lists include among others:

The draft of the European MoU, obtain by daily Kathimerini, states among others:

1. The primary surplus of 2016 stood at 3.2% of GDP. The paradox is that at about the same time,   European Commission spokesman Margaritis Schinas, was saying that according to program definition, the primary surplus was 4.2% of the GDP.

2. Further pensions cuts worth 1% of GDP are expected to be implemented in 2019. The measure will be in cutting the personal difference up to 22%.

3. It is expressly stated that labor issues agreed upon in previous Loan Agreements (MoU I, II and III) will be in effect until the end of the program.

4. As regards collective redundancies, the veto of the Ministry of Labor is abolished and the whole process is supervised by the Supreme Council of Labor. However, it does not foresee an increase in the limit.

5. In the case of energy, the lignite power of the Greek Public Power Company will gradually decrease by around 40%. Privatization to private companies through tenders.

6. Abolishing of restrictions on the operation of stores on Sundays, whether these concern the size of the shops or the areas in which they operate.

7. Full implementation of the Privatization Fund plan, which includes: privatization of 17% of Greek Public Power Company,  35% of Hellenic Petroleum, 30% of Athens International Airport, 65% of Public Gas Corporation (DEPA) and others.

Energy, privatization and the new super Privatizations Fund will be on the negotiations table on Tuesday.

The ‘reforms’ should be legislated by middle May.

The creditors representatives are due to stay in Athens until Sunday,  April 30, 2017.

Of course, the creditors’ demands listed above a only a tiny part of the long list I am sure we will learn more in the next days.