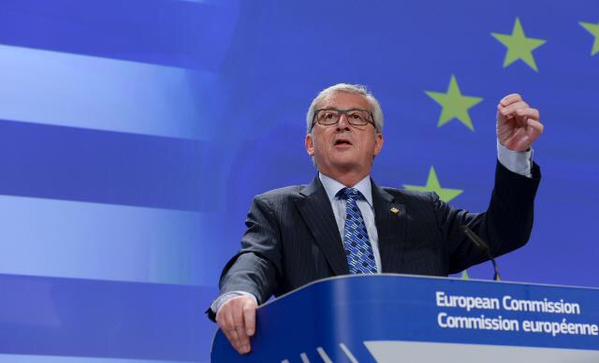 Juncker suggested it was time to give Greece some slack rather than enforce more cuts.

“We have to acknowledge that Greece is making a huge progress and insisting on further major cuts in the pension area would be bad advice,” Juncker said.

AP: Mr. President, you had a bilateral meeting with IMF’ Managing Director Christine Lagarde last week. What was the outcome of that discussion?

JCJ: It was a friendly debate as always. I was stating my points; I was saying that we have to bring the Greek issue to an end. I would like the Eurogroup to take final decisions on the 22nd of May. I was told -not only by Christine Lagarde – that “yes” they are in line with this statement but they do think that there would be particular problems that have to be postponed for a later date. I was stating the view that no major cuts in the pension sector should be pursued by the institutions, because only the poor part of the Greek society – the pensioners and the retirees – are suffering. I think all these efforts, to have cuts in the pension sector are not taking into account the recent Greek (economic) performance. The surplus in 2016 was higher than expected by the institutions. Not by the Commission but by other institutions. We have to acknowledge that Greece is making a huge progress and it will a bad development if we insist on major cuts in the pensions. Because in social democracies, there is a limit to efforts.

AP: Have you stated this to Mrs. Lagarde?

JCJ: Yes I was explaining this view, my assessment of the situation.

AP: What was her response?

AP: I am asking you, you are the one who made the point.

JCJ: I told you what my points were and I did not get the impression that she was in total opposition to what I was telling her.

AP: What does the IMF want? Do you think that your points will be heard?

JCJ: I don’t know the secrets of the IMF but I am always optimistic when it comes to Greece.

AP: What is your assessment of the Greek government right now?

AP: What do you think of Mr. Tsipras?

JCJ: I am not objective when it comes to Alexis Tsipras because I like him as a person. We had some difficulties at the very beginning but we have built up a good relation and this good relation is still in place.

AP: Some say that it was with your background intervention that we had an agreement at the Malta Eurogroup. Is that true?

JCJ: I was telling those sitting around the table, not all but some, what my assessment was that we need – how do I say this – not comfort to Greece but to recognize that in contrast to what some governments were saying, Greece is delivering to a large extend. The fact that Greece managed a surplus of the magnitude as the one in 2016, I have to say, it is impressive. People should recognize this effort.

AP: Some also say that your strong ties with the parties in Germany also played a role in the Malta Eurogroup decision and the German backing down from its tough position. Is that true?

JCJ: I tried to do it. If it worked I would be retrospectively happy.

AP: Do you think that we would have an agreement on the debt before the German elections or will there be a decision made in stages?

The IMF has yet to decide on participation to the Greek program. Nevertheless, in its adviser role it has managed to push for additional measures of further pension cuts and taxing the poor in 2019-2020.