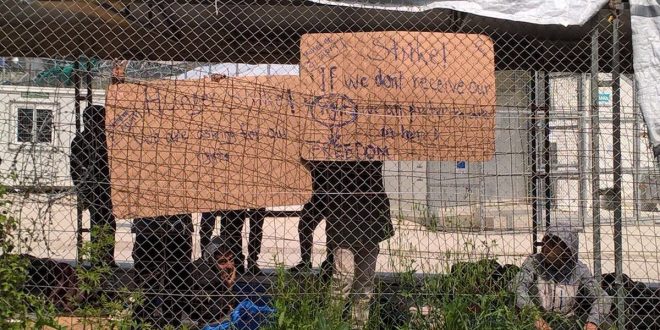 Syrian refugees of Kurdish origin continue their hunger strike for sixth consecutive day in the hot spot of Moria on the island of Lesvos. The twelve men protest for long delays in the process of  examining asylum requests by the secondary committees.

Eleven of them launched the hunger strike last Friday Apr 11, one more joined the protest on Saturday.

They do not accept other nationalities to join their group protest.

Despite the repeated discussions with the center’s commander and lawyers of the asylum service explaining the time-consuming process, they are determined to continue the hunger strike until they are allowed to move to the mainland.

One of the hunger strikers was transferred to Mytilene hospital on Tuesday.  As they deny also fluids, the man suffered from exhaustion and dehydration. He returned to the hot spot later on the day.

The hunger strikers have spread their blankets in front of the offices of the asylum service.

They have been on the island from 3 to 8 months.

This morning state ERT TV reported that their asylum request has been rejected on first instance. The men say their lives are at risk because of their Kurdish origin should they be returned to Turkey from where they illegally entered Greece.

While asylum procedures have been reportedly stepped up in recent months, there is no clarification about Syrian refugees of Kurdish origin. The asylum committees have been awaiting the decision of the Council of Europe. The CoE meeting took place in early March [!]. Its decision will clarify whether Turkey is a safe country for refugees.

While Syrian Kurds assist Allied forces against the Assad regime, Turkey considers them as enemy because of its own internal conflict with the Kurds in Turkey.

The are reportedly 2,200 people in the hot spot of Moria, that hosts refugees and migrants who arrived in Greece after the EU Turkey Deal in March 2016.

While the deal has significantly decreased the migration flow, people keep leaving the coast of Turkey and attempt a new life in Europe. Not all manage to arrive.

At least 16 people, among them two children and 6 women, were drown when their boat capsized off Lesvos on Monday. Search and Rescue operation in Greek and Turkish territorial waters managed to rescue only two women. It is estimated that seven more people are missing.