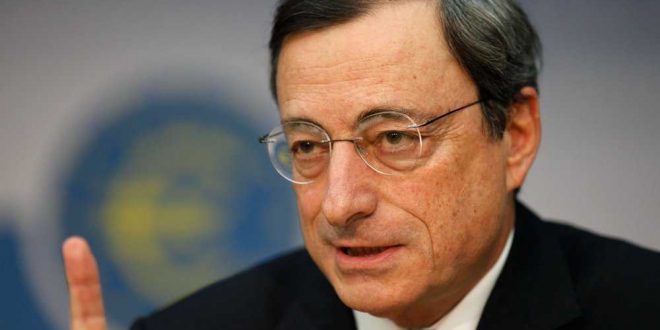 European Central Bank president Mario Draghi keeps interest rates at historic low.The low interest rate cause a blow to million of deposits of ordinary people who trust their live savings to the banks.

In a statement issued on Thursday, the ECB said:

Regarding non-standard monetary policy measures, the Governing Council confirms that the net asset purchases, at the new monthly pace of €60 billion, are intended to run until the end of December 2017, or beyond, if necessary, and in any case until the Governing Council sees a sustained adjustment in the path of inflation consistent with its inflation aim. The net purchases will be made alongside reinvestments of the principal payments from maturing securities purchased under the asset purchase programme. If the outlook becomes less favourable, or if financial conditions become inconsistent with further progress towards a sustained adjustment in the path of inflation, the Governing Council stands ready to increase the programme in terms of size and/or duration.

ECB watchers expected the bank to hold steady at this month’s meeting, as political uncertainty and weak inflation discourage it from heading for the exit from its massive support for the economy.

The ECB’s interventions are designed to encourage banks to lend to the real economy, powering growth and pushing inflation towards its target of just below 2%.

But while policymakers say they see a firming recovery in the euro zone, inflation fell back to 1.5% in March after briefly overshooting the goal in February.

At press conference later today, Mario Draghi said among others, downside risks to recovery have diminished.

Germany has vehemently criticized the ECB for the low key interest rates.

They said the policy was aimed exclusively at stimulating lending and economic growth by lowering interest rates, while disregarding the resulting burdens for the financial sector.

This policy – and the continuing growth of loans with too-low interest rates – have dampened profit margins in the sector and raised the risk that necessary reforms would not be carried out, the report said adding that many financial institutions, including insurance companies, were having trouble generating any profits and covering their costs as a result of the ultra-low rates.

However, a couple of days ago I read an article posted on a German newspaper saying how much money Germany earns from the low interest rates. Germany, the country, not the people. Unfortunately, I cannot find it today, so I cannot give you the exact profit made by Schaeuble & Co.

PS Due to capital controls Greeks are obliged to ‘lend’ their money to the banks and earn just a few cents. zero + zero = zero