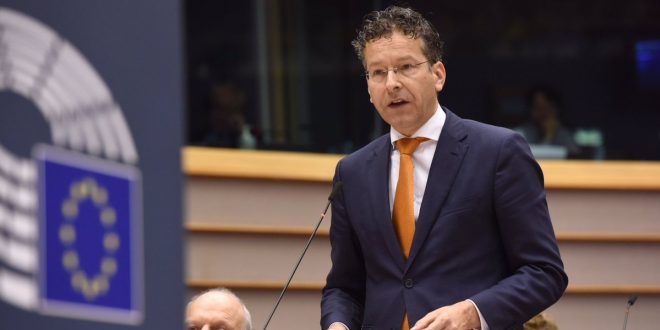 Eurogroup head Jeroen Dijsselbloem appeared at the Plenary of European Parliament for the first time after he stirred the Europeans of the South with insulting remarks. He made a kind of apology saying “I did not want to hurt anyone.”

But as the Plenary topic was Greece, Dijsselbloem gave a taste of what is going to happen with the Greek issue – obviously following instructions by German Finance Minister Wolfgang Schaeuble.

“Greece will need a debt relief for its public finances and economic future to become sustainable,” Dijsselbloem said signalling a U-turn to previous position of Eurogroup and Berlin  that debt relief would be discussed, but only once the latest bailout ends and only if it turns out to be necessary.

“Yes, we will discuss debt and debt relief will be needed to find that solution, that is my opinion and I believe that is shared in the Eurogroup,” he said,

“Already last year we gave that commitment to come back to the issue of sustainability of debt for Greece, because that is the only way they will come back on a sustainable path and a sustainable economic future,” he added.

He expressed confidence that an agreement on overall policy package will be reached very soon, that is at the Eurogroup of May 22.

“We are focusing on reforms aimed to growth in Greece and not on austerity. Fiscal outcome to be used for boosting growth. Looking for a sustainable situation soon,” he said among others.

“I commit myself to come back to the European Parliament with an agreement on Greece in May,” he told MEPs.

Th bombshell Dijseelbloem dropped in the middle of the Plenary was not about Greece though. It was about the European Stability Mechanism fund (ESM) to turn into a Euroipean Monetary Fund. Dijsselbloem copy pasted recent remarks by Wolfgang Schaeuble on the issue and presented them as his own.

“The ESM in my mind should be in the lead in designing, negotiating and monitoring future programs. Also the ESM could in the future have a broader preventive mandate in line with the IMF, how the IMF does it now, by developing its own country reports to assure objective macroeconomic analysis,” he said.

“One way to move forward in strengthening the (euro zone) is to develop the ESM further into a European Monetary Fund,” Dijsselbloem added. He said that “European technocrats examine the ESM, the results will be published in June. There will be also a supervising mechanism to avoid future crises, he added.

Of course, this EMF ‘vision’ is in sharp contrast to Schaeuble’s insistence that the IMF should definitely participate in the Greek program.

Dijseelbloem’s soft apology – ‘my statement was misinterpreted, I did not want to hurt anyone’ – was not accepted without criticism.

“You insulted all of us women, you had European institutions lose their credibility,” MEP Ska Keller (Greens) told him. “You managed to insult half Europe,” Keller said.

Jeroen Dijseelbloem stirred the whole Europe against him when he claimed “the European South spent all the aid funds in alcohol and women.”

Ministers, head of states and the European Palriament called on him to resign. He insisted to stay until his mandate expires at the end of the year. Nevertheless, Dijsselbloem has been tolerated in this position because Schaeuble did not want to replace the head of the Eurogroup before the second review of the Greek program was over.

As his party lost big in the Dutch elections, Dijsselbloem’s chance to remain as Eurogroup head are slim after May/June, because his party will most likely not join the coalition government in the Netherlands and he will hold no ministerial post anymore.