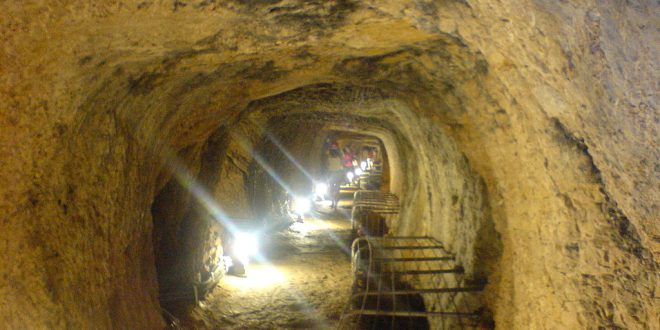 One of the greatest engineering achievements of ancient times, a Greek wonder on the island of Samos, the 6th century BC Eupalinos Tunnel re-opened to the public this week following extensive restoration works.

The 1,036m tunnel or Eupalinian aqueduct was excavated more than 2,500 years ago from both ends using the principles of geometry to such precision that it stands as a testament to the ingenuity of ancient Greek engineer Eupalinos. Today laser-guided machines are used to drill tunnels from both ends.

The tunnel is the second known tunnel in history which was excavated from both ends (Ancient Greek: αμφίστομον, amphistomon, “having two openings”), and the first with a geometry-based approach in doing so.

Two groups working under the direction of the engineer Eupalinos from Megara dug a tunnel through Mount Kastro to build an aqueduct to supply the ancient capital of Samos (today called Pythagoreion) with fresh water.

This was of utmost defensive importance, as the aqueduct ran underground it was not easily found by an enemy who could otherwise cut off the water supply. The Eupalinian aqueduct was used for a thousand years before it fell into disuse, archaeological findings proved.

The Eupalinos Tunnel is part of the Pythagoreion archaeological site, an UNESCO World Heritage Site since 1992.

“Traversing the Eupalinos Tunnel is a once-in-lifetime experience… Let’s take heed of what it has to say about the ancient and contemporary engineers,” said Greek Culture Minister Lydia Koniordou on Tuesday, during the opening event on Samos.

The restoration works were funded by the EU’s NSRF program and cost 3.1 million euros.

The site can now be visited in its entirety and together with the Pythagoreion and Heraion offer one of the most rewarding travel experiences in Greece and on Samos.

Technical details of the tunnel here.