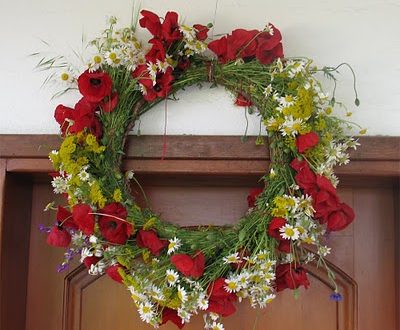 Greek customs: May Wreaths symbolism and why people used to steal them

When I was a child it was a must in the whole neighborhood to prepare May wreaths and hang them on the entrance door on the eve of May 1st. We would go out in the land plots between the houses, to squares and parks and pick wild flowers, white and yellow daisies, poppies and occasionally camomile that was blowing wildly with its small yellow and white flowers. My mom would also cut some of her most beautiful roses from the garden and stick them among the wild modest blooms. White roses, pink and red. My mom was a master in decoration, and me, the little helper… well.. I did wanted to help… but… Wandering in areas full of green grasses and wild flowers was a torture due to my pollen allergy. Flower picking was killing me. As if it wasn’t for the sneezing, the runny eyes and the full nose, I was apparently attacked to these stupid, wild growing greens, the nettles. The would attack me with huge portions of histamine and had me return home in a state of ultimate discomfort, a physical and emotional wreck. But I enjoyed it.

In other words: picking the flowers for May wreaths was a torture. I was feeling obliged to go get them, together with other neighborhood kids – despite the fact my mom was telling me not to do so.

I loved to do my share to this lovely tradition.

Another tradition of the May wreath was to go steal flowers from other people’s gardens when it was dark. I have no idea why we were doing this. And it wasn’t just us, the kids, doing this stealing. Adults would also stretch their hands too and break a beautiful rose,  a couple of carnations, or whatever would hang out of the garden fence. Some more bold would also go inside the gardens and leave with a flower bouquet in their hands.

My grandma was assigned with the duty to guard over our home garden on the eve of May 1st. She continued to do so until we got our first dog. The stealing of mom’s roses found an abrupt end.

I have no idea why this flower stealing was common. Maybe because people did not have a flower garden or money to buy flowers? My mom was furious about this nasty habit, and I once got to hear the whole Leviathan when a neighbor complained about us, a bound of  six to ten 8-year-olds who had raided once all the gardens located in a couple of blocks.

Bad habits, nasty habits. My mom used to say that it was the people from the villages who were doing that. And she maybe was right. Partially.  In some areas in Greece, the custom was to steal the May wreath, not just flowers. It would be done by young men who the next day would give the wreaths to the girls they liked or loved. Apparently in big city like Athens, they would steal single flowers if there was not wreath hanging at the door – or if the provident home owners had clamped the wreaths so secure that nobody could remove them.

But the good habit of May Wreaths remains, even if not so popular as it used to be during my childhood years.

The May wreaths is not a Greek only custom. It is common also in other countries around the Mediterranean and in Europe.

According to folklore research, the wreath is made with a rod of flexible and durable arbor or wire around which the flowers are supported.

The customs and actions that accompany the May 1st wreath “start from the depths of human tradition and pass from generation to generation,” I read on Greek internet.

May is the fifth month of the year – in Greece, Rome and until Byzantium – dedicated to the annual celebration of the goddess of fertility and agriculture, Demeter. Her daughter, Persephone, who comes from the Underworld, was the reason for the Feast of the Flowers (Anthestiria), a magnificent procession of ancient Greece, where people would flock to temples and sanctuaries to offer flowers.

In popular perception, death and birth, good and evil coexist. All the houses, except those who have mourning, make a wreath for protection from the evil eye, for health and happiness.

It symbolizes the regeneration of nature with spring, which we want to bring to our home.

The wreath will remains hanging at the entrance door until mid-summer. At the feast of St. John of Klidonas, on June 24th,, the May wreaths are thrown in the open fires lit on the streets and squares. 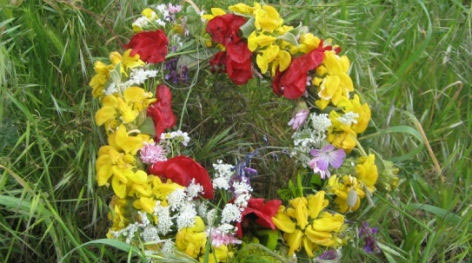 My allergy nightmare: a May wreath in a field full of green grass…. 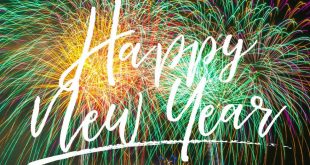 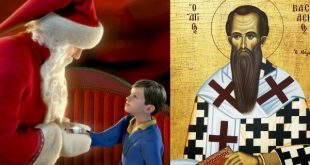