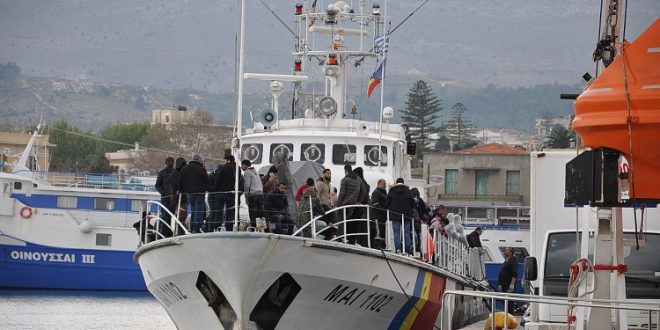 105 refugees were rescued in two different incidents on Friday. A Romanian vessel of Frontex located and rescued 45 refugees and migrants in the sea region of Keramia off the island of Chios in the eastern Aegean Sea. In a second incident, 60 refugees and migrants were rescued in the sea region of Mytilene airport on the island of Lesvos.

According to official data, there are currently 8,566 people in camps and other accommodation facilities on three islands of the eastern Aegean Sea. 3,019 people on Lesvos, 3,829 on Chios and 1,718 on Samos.

For the second consecutive night, clashes between refugees and migrants occurred in the hot spot of VIAL on Chios.

Syrian refugees complain that groups of young Afghans attack them with stones.

According to local newspaper politischios.gr, the Syrian complain about ongoing attacks by the Afghans “almost every night”. During the attack on Wednesday, a refugee was injured by a stone, his pregnant wife had to be taken to hospital due to a shock she suffered.

The riot police had to intervene to diffuse tension and restore the order in the camp.

Tension and clashes occur often in VIAL, local authorities try to find a solution to the problem.