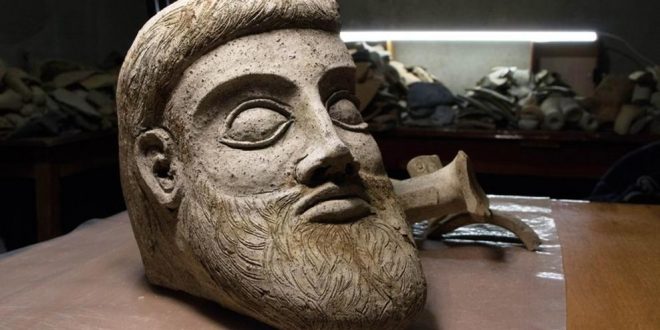 2,500-year-old Greek god found in the bottom of Kerch Bay in Crimea

Russian constructors have found  the head of a 2,500-year-old terracotta statue of a Greek god during underwater construction operation off the Crimean Peninsula, according to recent media reports in Russia.

Chief of the underwater archaeology unit of the Russian Academy of Sciences, Sergei Olkhovskiy has announced that the discovery of the terracotta is a unique artifact of the Northern Black Sea Region, and stressed archaeologists have never come across anything like this before, according Spanish newspaper El País.

The finding of the Greek god was located on Kerch Bay, along the strait that occupies the east coast of the Crimean peninsula, where the Black Sea meets the Sea of Azov and a bridge that will eventually link the two coasts is being built.

The archaeological study of the recently discovered “pottery field” commenced about two years ago, when the bridge was being designed. Since then, underwater excavations have collected more than 60,000 pieces. Most of them are fragments of ceramic vessels made in the Mediterranean and Asia Minor between the 5th and 3rd centuries BC.

“The usual practice in the 6th century BC, were small figures, about 40 centimeters high,” El Pais writes and adds:

“The mass production of terracotta images is already widespread since the sixth century. The most common practice was to make small figures, about 40 centimeters. But the head found in the Bay of Kerch corresponds to a much bigger and robust statue of a Greek god.”

The archaeological study of the “pottery field” found at Cape Ak-Burun began about two years ago, when the bridge was being designed. In that time, underwater excavations have allowed to collect more than 60,000 pieces, most of which are fragments of ceramic vessels made in the Mediterranean and Asia Minor between the 5th and 3rd century BC. The sediment is scraped and transported by hand to the surface to reduce the risk of damage to the most fragile parts.

The sculpture has been dated back to 5th Century B.C. and is considered to have been made in Asia Minor or Anatolia as it is also known. Nevertheless, more will be ascertained after it has been thoroughly examined  by specialists in ancient Greek art and more research work have been conducted.

The Strait of Kerch has a width of between 4.5 and 15 kilometers and 18 meters deep. In ancient times, this region was known as the Cimmerian Bosphorus and housed several Greek colonies of Ionian origin founded during the 7th and 6th centuries BC.

Cimmerians were ancient nomadic people who overran Asia Minor in the 7th century BC.