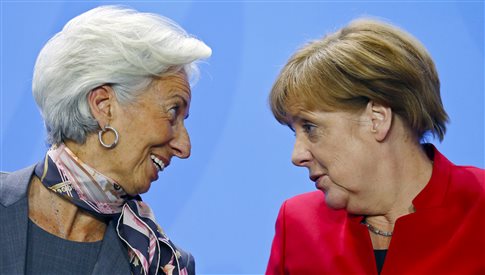 Greek Prime Minister Alexis Tsipras and managing director of International Monetary Fund Christine Lagarde agreed on the need for debt relief measures. Furthermore, Lagarde sent a clear message to Berlin. the Fund will not participate in the Greek program without debt relief measures.

During their meeting on the sidelines of the Belt and Road forum that is held in Beijing, Lagarde sent the message that if Berlin does not agree on a feasible fiscal ‘path’ then the IMF will leave from the program, government sources told the Athens News Agency.

If the IMF leaves the Greek program,the additional austerity measures for 2019-2020 will not be implemented, Tsipras reportedly told Lagarde.

The measures worth  2% of GDP, 3.6 billion euros were asked by the IMF as one of the conditions to join the Greek program. The measures include further cuts in main and supplementary pensions and lowering the tax-free basis, that is taxing the poor. Tsipras has recently said if no debt relief measures and if no IMF participation, then Greece will not have to implement the measures.

According to ANA, Tsipras and Lagarde totally agreed on the need for a solution for the Greek debt now and the definition of the mid-term measures immediately. Such a development is necessary in order the growth potentials of the Greek economy to unfold.

Moreover, Lagarde noted that if German Finance Minister Wolfgang Schaeuble insists on the view that there is no need for debt relief and a feasible fiscal path after 2018 can’t be agreed, then the IMF will leave from the programme.

Tsipras answered that in this case (if the IMF leaves from the programme) then the measures that will be voted in the Greek parliament on May 18 will not be implemented in 2019-2020.

The IMF issued a statement on the Lagarde-Tsipras meeting saying merely:

“The Managing Director of the International Monetary Fund Christine Lagarde met with Greek Prime Minister Alexis Tsipras today in Beijing on the sidelines of the Belt and Road Forum. They took the opportunity to discuss progress being made in Greece’s economic program. They exchanged views on next steps and the importance of continued implementation of agreed reforms and support from Greece’s partners, including appropriate debt relief measures.”

I suppose, Lagarde has said this directly to Schedule and does not expect the communications with Berlin to happen via anonymous Greek government sources. Right?