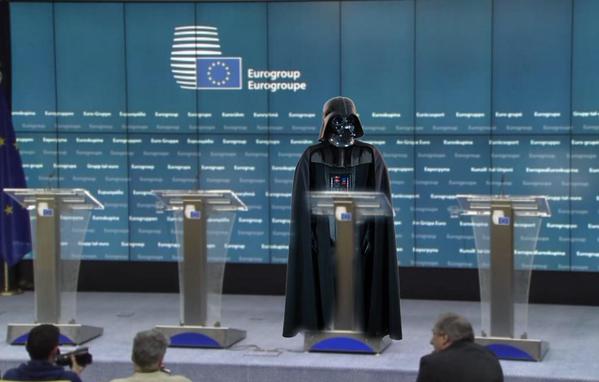 Chances are 50-50 for a comprehensive agreement over the Greek program at the Euroroup meeting on Monday, May 22 2017. A high-ranking Eurozone official, anonymous, of course, talked to several media representatives and correspondents late Wednesday afternoon and briefed them on the upcoming Eurogroup meeting.

Among others, the EZ-official emphasized that

at present there is no agreement on the table to guarantee the sustainability of the Greek debt, with such a prospect also given a “50-50” chance on Monday.

The top official merely confirmed the widely reported disagreement between creditors over the debt issue.

The same source said that the IMF’s involvement in the Greek program is a condition for the continuation of the bailout.

there will be no bailout trance without the participation of the IMF.

The EZ-official said that a comprehensive agreement includes

The official also said that at the Eurogroup on May 22, also will be decided the size of the primary surpluses that Greece must achieve after 2018. The official noted that the 3.5 pct of GDP target must be maintained for a number of years (though probably not 10) before it was reduced.

Regarding the disbursement of the next bailout tranche of 7 billion euros, the official said that this will depend on whether the International Monetary Fund (IMF) decided to participate in the Greek programe.

“The disbursement may be broken down in installments directly linked to the timing of Greece’s financing needs,” the EZ official reportedly said adding “It is not necessary for the IMF to participate in the first disbursement (it means in the first sub-trance if it decides to enter the program to unlock the flow first from the European side). No money will be given until the IMF says “in principle, yes, I will participate”.

The official appeared confident that there would be sufficient time before Greece has to make the next large repayment of loans in July, however, noting that eight weeks remained until that time. and also pointing out that in previous cases in the past, the initial agreement of the IMF Managing Director Christine Lagarde has been sufficient.

As the statements of the Eurogroup or Eurozone official stand, I am afraid there could never be a comprehensive agreement before the end of 2019, when the Greek government will have implemented the prior actions Greek lawmakers will vote for tomorrow Thursday. The prior actions is an austerity package of 4.9 billion euros for 2018-2021.

Of course, I am wrong. Eurozone officials know better.

But we should take into consideration that the IMF and Berlin have not agreed yet on the Greek debt and therefore a lot of nonsense can be said and claimed in the context of putting pressure at all directions.

According to the official agenda, the Eurozone finance ministers will be briefed on the “preliminary agreement” between Greece and the institutions on the new measures agreed for the second review and will examine the medium-term fiscal targets, as well as debt sustainability issues.

Whatever traps and tricks the creditors have in mind…. anyway, Prime Minister Alexis Tsipras is confident about the  future of the country, he told  reporters today, he may even be obliged to have to wear a tie soon.

“The second review concludes, we get the debt [relief measures], we will have an investment tsunami,” Tsipras said. He added, he “doesn’t believe that German Chancellor Angela Merkel will want to go to elections with Greece in crisis.”

Once he came to power in 2015, Tsipras said he will wear a tie when Greece exits the bailout agreements. Or something like that.

PS Had I be one of those mean Greeks, I would say that Greece’s creditors especially those high-ranking eurogroup officials use the same old tactics of threats and blackmails. But I am not. And I need to rush to a shop to purchase a tie for the PM, anyway.