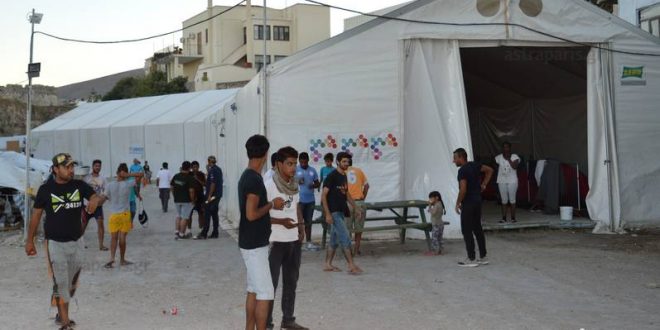 May 17, 2017 Refugees Comments Off on Food poisoning in Souda camp sends 40 refugees and migrants to hospital 943 Views

Dozens of refugees and migrants from Souda camp on the island of Chios were transported to the hospital as of Tuesday afternoon. Local media report that “according to all indications, the poisoning was caused by the chicken meal they had for lunch.”

Two local catering companies in contract with the Norwegian Refugee Council (NRC) deliver daily meals for the refugees and migrants in the camp.

The symptoms reportedly started early afternoon and some 40 people affected by the food poisoning started to flock to the hospital by any means. By the evening the Emergency of the hospital was full, among the affected were also seven children.

Many were taken to the hospital by friends and relatives and the volunteers working in the camp.

Two of the affected were hospitalized due to the severity of their condition.

The hospital administration gave instructions for the thorough and systematic disinfection of the sanitary facilities of the camp.

Samples of food were taken by health authorities. They will be examined to ascertain the exact causes of poisoning.

According to local media, the NRC ended the contract with the one of the catering companies that had delivered the particular food. For the time being, the second catering company will deliver meals for the whole camp.

Skai reported that also eight people from another refugee camp went to hospital with food poisoning symptoms from Tuesday night to Wednesday morning. the reported said that these camps are “illegal” and that the problem may be in the water.