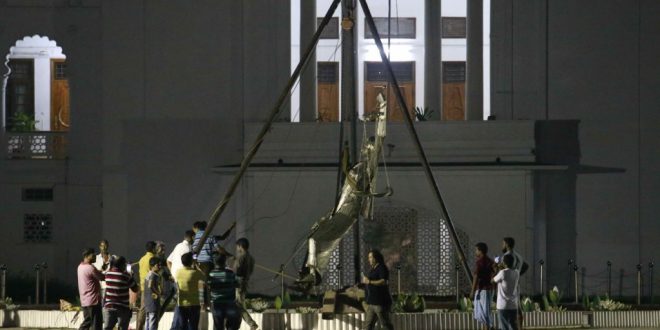 May 26, 2017 World Comments Off on Greek goddess statue removed in Bangladesh after Islamist outcry 556 Views

Workers have begun to dismantle the statue of a Greek goddess from Bangladesh’s Supreme Court complex, after an outcry from Islamists.

The sculpture of Themis – the goddess of justice – wearing a sari was installed outside the court in December 2016.

Several radical Islamist groups, including the Hefazat-e-Islam, a body of madrassa teachers and students, the Awami Olama League and the Islami Andolan Bangladesh had been campaigning for months against the sculpture for being “anti-Islamic.”

They claimed it hurt the religious sentiments of Muslims  and staged mass protests in the capital Dhaka.

Prime Minister Sheikh Hasina agreed to its removal, saying she does not like the idol and would talk to the Chief Justice about removing it.

Workers came with equipment and a crane at midnight to uproot the controversial statue, the BBC’s Bangla service reported. 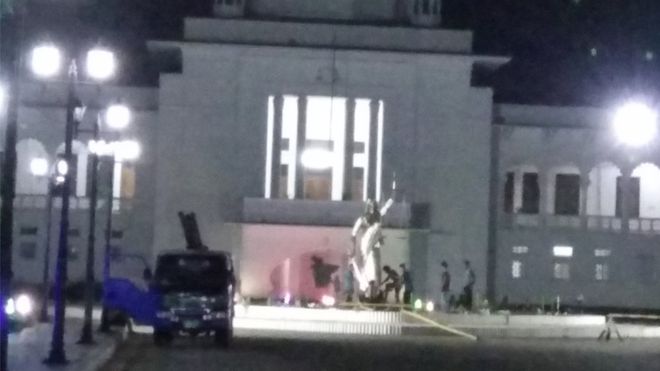 The statue is being removed to maintain peace, said its creator Mrinal Haque.

“This is a Bangalee woman, wearing a saree. There is nothing Greek about it. This is nothing but a symbol of justice,” he said. Asked by reporters, he says he does not know where the statue will be placed.

Analysts say this is just a sign of the rising tension between Islamic conservatism and liberal values in Bangladesh.

Protesters have long asserted that the figure, which held the familiar sword and scales of justice in her hands, amounted to idolatry.

According to Dhaka Tribune, the sculptor who oversaw the removal told journalists, the move was a slap in the face of progressive ideals in the country.

Protesters who gathered there and shouted slogans against the decision have called a march and demo later in the morning.

The terrorist group Ansar al-Islam, the Bangladesh affiliate of al-Qaeda in the Indian Subcontinent (AQIS), has also expressed its support for the demand.

Attorney General Mahbubey Alam tells Bangla Tribune that the statue of Lady Justice has been removed by instruction of the Chief Justice.