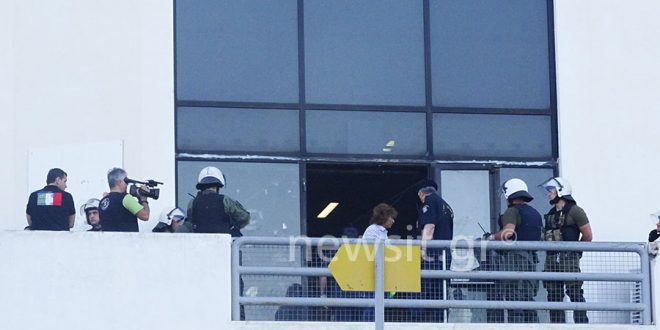 Greek police along with authorities representatives, officials from the International Organization for Migration and interpreters, conclude the clearing out of a makeshift migrants camp at the premises of the old Athens airport Hellinikon.

Buses arrived at the camp on Friday morning, by noon they had left the area with 168 people on board. Migrants are to be transferred to organized camps in Thebes and Malakasa north of Athens.

According to UNHCR, 351 vulnerable people and families with little children, were transferred already in April and May. They were moved to hotels and apartments within the Attica prefecture.

Hellinikon was established as unofficial and temporary refugee camp in autumn 2015 amid the Refugee Crisis. Initially authorities had transferred to Hellinikon people sleeping at the docks of the port of Piraeus. Later also people from the improvised  camp of Idomeni camp at the borders between Greece and FYROM.

More than 500 migrants and refugees mostly from Afghanistan had been living there often in appalling conditions.

Human rights groups criticized conditions there as deplorable and unfit for humans. Hundreds slept crammed in tents in the old arrivals terminal, in scorching summer temperatures and snow in winter and bouts of crime and violence. There were often claims about the hygienic conditions and the food quality and quantity.

In February, some of the refugees went on hunger strike to protest the lack of hot water and suitable food.

Funded by EU Humanitarian Aid programs, international NGOs have helped with sanitary facilities and medical care in the three camps in the area.

“We hope the people will not go to a new ‘hellinikon’ but they will live in much better conditions,” mayor of the area, Giannis Konstantatos, told reporters during the clearing on Friday.

The government had long promised to empty the site, which it has agreed to lease to private investors under its bailout program, but struggled to convince the migrants to move to other camps in the mainland.

Many migrants, mostly Afghans not eligible for an European relocation program to other member states, feared moving farther from Athens would make it harder to leave Greece.

Pressure to relocate the people from Hellinikon increased after the Greek Privatization Fund signed a deal with the Lamda Development. The old airport was abandoned since 2003.

The transfer is expected to conclude later today.

Solidarity groups protested the transfer claiming the migrants had give their consent signing papers in languages they did not understand.

Migrants and refugees were informed about the evacuation since May 24th.

There was some tension between reporters and police, as the first were kept away and were not able to cover the transfer operation.

When one reporter tried to come closer, police grabbed him and took him away.

The operation was scheduled to start at 6 o’ clock in the morning but was postponed to 6:30 in respect of the Ramadan. More pictures from the evacuation here.

More than 62,000 people are stuck in Greece since the closure of the Balkan route and the EU Turkey Refugee deal.