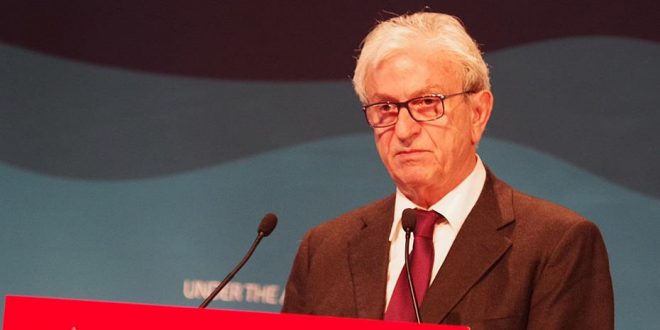 German finance minister Wolfgang Schaeuble attacked on Thursday prime minister Alexis Tsipras for “not having taxed Greece’s powerful shipowners as he had promised.” Schaeuble’s statement seemed a bit weird and out of the blue because Tsipras had made many promises  before the elections and was able to fulfill none of them due to the economic situation of the country. So why did Schaeuble care about taxing Greek shipowners but didn’t give a dam about the other promises?

In a statement released by the Union of Greek Shipowners, chairman and shipowner Theodoros Veniamis writes:

“The recent and unwarranted attack on our country by the German Finance Minister, Mr. Schäuble, and in particular against Greek shipowners has raised questions.

It seems Mr. Schäuble has chosen to ignore the particularly favourable regime enjoyed by German shipping, while attacking the regime of Greek shipping, which, also, amounts to 50% of EU shipping, an achievement that seems to cause annoyance.

At a time when the European Union is called upon to underpin and enhance the competitiveness of its shipping industry against fierce international competition, Mr Schäuble’s criticisms are especially inopportune and unfounded.

The question that also arises is whether, despite favourable arrangements at all levels (shipownership, ship management, natural persons), the inability of the German maritime policy to successfully support its shipping is the motivation behind the Minister’s statement.

If the aim of his statement is to undermine the close ties of Greek shipping with its homeland, then it demonstrates that he does not want to see Greece on a path of growth at last.

For Mr. Schäuble’s information, the Greek shipping community in its entirety responded to the need to enhance the national revenues with its decision four years ago to voluntarily double its annual tonnage tax liability per vessel, even though it historically enjoys constitutional guarantees regarding the level of taxation. This is an initiative that proves the unity and solidarity of the Greek shipping community with its homeland.” (via allaboutshipping)

It is not the first time that the German finance minister had asked Greece to tax the shipowners claiming that if they were taxed, the country would not need additional loans.

According to German Shipowners’ Association, the German fleet has been ‘losing’ every forth ship since 2012.

The German Reeder Association announced last year that the German commercial fleet decreased for the third consecutive year down to 3,122 ships. In 2017, a total of 182 German ships were sold, 68 of them were container ships which are the backbone of German shipping. Many of them were bought by Greek shipowners.

A couple of months ago, German Transportation Minister Alexander Dobrindt had promised to German Reeder Association ‘state support in manpower and insurance contributions.’ He assured German shipowners that Berlin ‘will  boost the competitiveness of the German shipowner.’ Dobrindt’s promises followed promises by Chancellor Angela Merkel to ‘create incentives in order to make the German flag attractive.’

German banks are the biggest providers of shipping loans.

Rickmers Holding (114 ships, 2,000 jobs) filed for insolvency on Thursday. Creditors demanded 275 million euro back. It is the first bankruptcy in German shipping since the crisis of 2008 broke out. However, “small shipping companies have disappeared from the market.” Rickmers bankruptcy may trigger large wake to hit the German shipping.

Rickmers is the most high-profile casualty in Germany’s shipping sector and another example of the deepening turmoil in a global container industry struggling with an oversupply of vessels and sluggish trade growth.

They pointed out that Schaeuble was wrong for one more reason “because Greek shipping is part of the European one, and if it moves to other countries outside Europe, the loss will be significant.”

A recent study conducted by Deloitte Monitor on behalf of the European Community Shipowners’ Associations (ECSA) pointed out at a number of policy gaps in EU’s shipping strategy that should be addressed in order to enhance EU’s competitiveness worldwide.

The study came to the conclusion that the EU policy for shipping has deficiencies especially in the criteria fields of taxation and fiscal incentives, flag attractiveness and legal framework.

According to the Deloitte tax department, the Greek tonnage tax (imposed on tonnage of the fleet) is estimated to be three times higher than the second highest in the EU. And ten times bigger than of Malta.