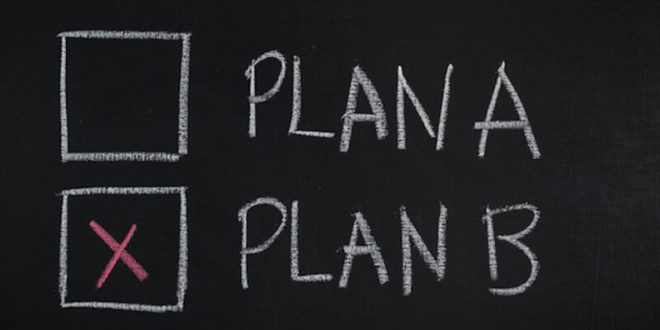 Europeans reportedly work on a Plan B for Greece. Who are exactly these “Europeans” I cannot tell you. The “European” creditors incl German Finance Minister Wolfgang Schaeuble? The “Europeans” of the European Commission and Commissioner Pierre Moscovici? Some other “Europeans” who have a saying but stay behind the stage?

It is not clear in the article published on the website of newspaper Kathimerini on Saturday.

However, according to the exclusive report, European officials have begun to discuss a Plan B for Greece that could be implemented in the autumn. Apparently after the German elections.

This Plan B is orientated towards an option with the International Monetary Fund being out of the Greek program.

Highlights of the Plan B are reportedly:

According to a “European official” who spoke under conditions of anonymity to Kathimerini:

In the autumn and before the third assessment of the Greek program, it may be decided that the IMF will not participate in the program, as the debt relief required for Greece is much bigger than the one the European partners intend to give.

In this way, Germany will not need to make a painful policy alleviation with regards to debt relief, and the IMF will retain its credibility – towards its technocrats, its board of directors, but also towards the markets – as it will prove that it does not bend to political pressures when the numbers “do not come out”.

Germany that will have approved the disbursement of the bailout tranche and has conclude its national elections and the government and the Parliament will be able to re-examine the issue of the Greek program without pressure, political or timely.

At the last Eurogroup, it became clear that the IMF is not willing to negotiate any further and “we
must now think about the alternative that will not include the IMF’s participation in the Greek program,” the official told Kathimerini.

However, if the Fund leaves, then a new program should be created replacing the existing one.

“The new program is not expected to have new measures, but it is clear that oversight of its implementation will fall into German hands, making the new program equally difficult, if not more difficult than with the participation of the Fund.”

Such a development would have short-term positive effects for the Greek government, as it could present the departure of  “tough IMF” as a victory, while some of the additional painful measures demanded by the IMF and voted by Greek Parliament will not be implemented.

If this plan turns to reality, Europeans are expected to accept no pensions cuts of 1% of GDP in 2019, but to have the tax threshold lowered in 2020 – as the IMF demanded.

The main disadvantage for Greece is that with the IMF out of the program, a debt relief would fall shorter than if the Fund would remain in the program.

Another disadvantage is  that Greece return to bond markets without the IMF stamp  will prove much more difficult, while foreign investors will think twice before investing in a country where the only guarantors are Europeans.

At the Eurogroup of June 15, no measures for the debt relief should be expected. Such decisions will be postponed for autumn, in best case.

However, the European creditors are willing to release a bailout tranche that will be higher than the scheduled one of €7 billion. It will be close to 9 billion euros. “The payment to ECB due in July is a little more over seven billion,” Kathimerini notes adding that the government will have some money to pay also own debts to suppliers.

There have been indeed recent media reports that the bailout tranche will be higher than originally planned. But who knows? Ahead of crucial decisions for Greece, all sides involved have been trying to play their games -ever since the country got its first bailout in 2010. They never fell short of ideas and scenarios.

Let’s see if this one proves to be true.

PS Pierre, is that you?