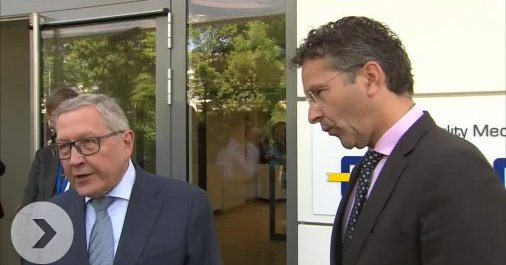 Eurogroup chairman Jeroen Dijsselbloem told reporters on Thursday that the Greek debt issue will be bumped to 2018, while a long-overdue second review of the Greek bailout will be achieved at a same-day Eurogroup meeting.

The Eurogroup head and Dutch finance minister made the comments just before entering a session of the European Stability Mechanism (ESM), which precedes the actual Eurogroup meeting.

Conversely, he said creditors are in agreement that the leftist-rightist government has fulfilled the prior actions demanded by the former.

Dijsselbloem added “We are at the end of the program and we must support Greece.”

In the end of the program will do final calibrations of what is needed. Then there will be more clarity to Greece and the IMF on how we move forward, he added.

So what do we expect today in Luxembourg? Most probably the conclusion of the second review and the release of the bailout tranche.

Arriving at the meeting Wolfgang Scaeuble said there will be agreement on bailout tranche at today’s eurogorup, state ERT TV reported.

PS Given these prospects I could finally get out of the office and run to the closest beach.