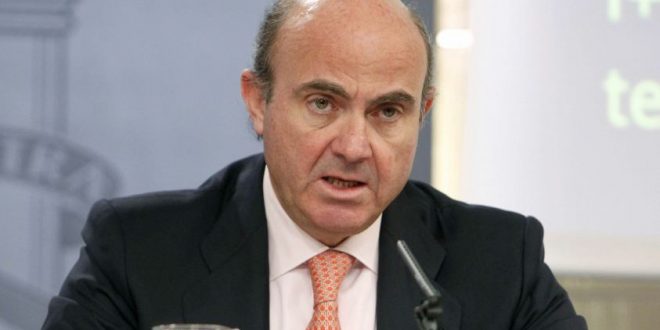 The Eurogroup may block an 8.5-billion-euro credit lifeline to Greece if the country does not grant immunity to privatisation agency officials from Spain, Italy and Slovakia, Spanish Economy Minister Luis de Guindos said on Friday.

In 2015, a Greek prosecutor charged three officials at the country’s privatisation agency over a sale and lease-back deal of 28 state-owned buildings.

“If there’s not a definitive solution for the situation of these three experts, the Eurogroup will block the payment,” de Guindos said in Luxemburg.

Greek corruption prosecutors raised charges against 6 members of the Greek Privatization Fund TAIPED for the sale of 28 public assets. Three of those members are Greeks, the other three from Italy, Spain and Slovakia appointed by  the Eurogroup. The six have been investigated for the period 2013-2014.

The six are suspected of “the crime of infidelity” and the “non beneficial use” of 28 state properties.

The charges against the six members of TAIPED relate to the sale and leaseback of 28 state properties via the HRADF.

According to prosecutor, the Greek state suffered losses totaling €575,856,504.

The case referred to two auctions won by two private companies. The auctions was worth a total of €2611,310,000. The contracts were signed in May 2014 and the Greek state had to lease the properties back for twenty years in order to cover housing needs for public services. The leasing price for the Greek state was €25,589,800 for the first year alone. The Greek state had to pay lease also properties that remained empty or half-empty, with the loss being €6,661,678.

Prosecutors also pointed out that in some cases, the “fair value of property” was devalued, thus reducing the amount of money received by the state and that “the value of land was not considered as well as other factors of the real estate market.

After testifying to prosecutor the six were released. They denied the accusations, claiming that their role was merely advisory and not binding for the board of HRADF that had the final say.

One of the accused is the Spanish president of Property Agency of the Spanish Government, another is his Italian counterpart and the president of the Stock Exchange of Slovakia. All three participated in the Council of Experts that recommended the sale of public assets to the Board of HRADF.

In June 2016, the European Commission intervened asking that prosecutors dropped the charges.

PS Odd that de Guindos said this after the Eurogroup deal. He had at least one year to negotiate with Greece about it. Maybe a development judicial-wise is underway.