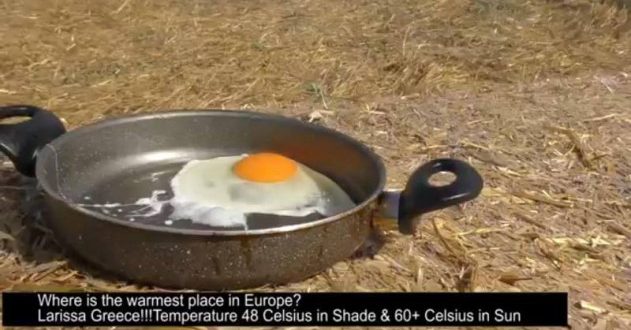 July 1, 2017 Uncategorized Comments Off on Greeks cooking eggs in the sun as heat wave strikes with 45C (videos) 8,553 Views

The cooking hit of Friday: save energy, fry eggs using natural heat produced by the sun. Directly by the sun. No need for photovoltaic installations and other forms of energy saving that are expensive in the short-term even though cheap in the long-term.

On the first day of the heat wave, temperatures reached more than 45 degrees Celsius in the shade. Heat is, of course, more intensive when directly exposed in the sun.

Greeks used eggs and cracked them in hot pans, marble surfaces or asphalt to demonstrate how hot the day was.

Larissa – one of the hottest places in Greece. Central Greece

Chania on Northwest Crete. Not the hottest area on Crete or in Greece, but 41 C on Friday noon was impressive as well.

Cooking an egg on the asphalt of the National highway.

In Trikala, also in central Greece they ‘fried’ an egg on a hot surface made of …marble.

Another Greek, interior decorateur Spyros Soulis, cooked a heatwave omelette in a downtown Athens balcony after letting the pan 20 minutes in the sun. 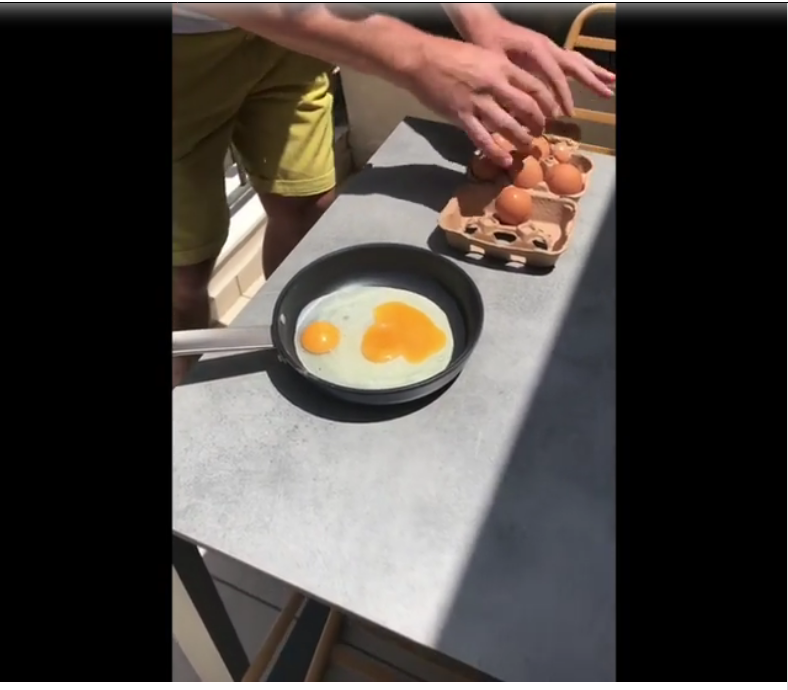 The eggs set immediately after they were cracked into the pan.

To tell you the truth I also thought to try to cook an egg on the hot stones in the sunny side of my balcony on Friday. Thermometer was showing 42.5 C.

I did not do it for two reasons: 1. I thought the stones were not hot enough 2. The mess that had to be cleaned especially if the egg would not get firm.

I admit, I didn’t think to put a pan on the stones and then the egg. Me stupid. Me hit by the heat wave.

And then the crucial question: How is it possible to cook an egg in the sun?

Here is what I found on internet:

An egg needs a [surface] temperature of 158°F (70 Celsius) to become firm. In order to cook, proteins in the egg must denature (modify), then coagulate, and that won’t happen until the temperature rises enough to start and maintain the process.

The sidewalk presents several challenges to this. According to an experiment reported in Robert Wolke’s book, What Einstein Told His Cook: Kitchen Science Explained, sidewalk temperatures can vary depending on the composition of the sidewalk, whether it is in direct sunlight, and of course, the air temperature. Dark objects absorb more light, so blacktop paving would be hotter than concrete. More often than not, sidewalks are concrete. Wolke found that a hot sidewalk might only get up to 145°F. Once you crack the egg onto the sidewalk, the egg cools the sidewalk slightly. Pavement of any kind is a poor conductor of heat, so lacking an additional heat source from below or from the side, the egg will not cook evenly.

Something closer to the conditions of a frying pan would be the hood of a car. Metal conducts heat better and gets hotter, so people actually have been able to cook an egg on a car hood’s surface.

PS “Once you crack the egg onto the sidewalk, the egg cools the sidewalk slightly. ” What? We can cool our streets by cracking eggs on them?