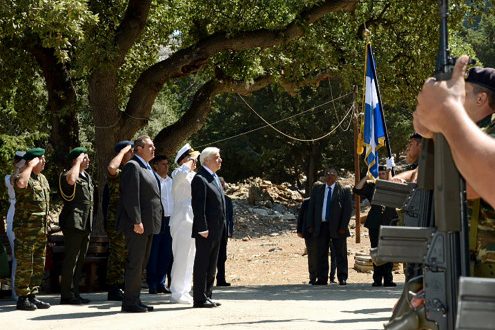 While Pavlopoulos’ helicopter was heading to islet Panagia, pilots received warning calls and threats from the Turkish armed forces. The Turks claimed the Greeks that they were flying in Turkish Flight Information Region. The Greek delegation ignored the Turkish warnings and the President landed safe in Panagia.

A day earlier, the Turkish armed forces called the Greek helicopters nearing the island of Rhodes to leave the area as “they were flying in a demilitarized zone” where such flights are forbidden.  The Greek pilots did not respond to the callings from the Turkish side.

A little later, the Turkish side called on the pilots of Shinook to leave the area as they were flying inside “the Turkish FIR.” On board were President Pavlopoulos, Defense Minister Panos Kammenos as well as the military leadership of the country.

In one incident, the military helicopters transporting Pavlopoulos suffered radio interference from Turkey.

Wednesday morning, a pair of Turkish F4 fighter jets entered the Athens Flight Information Region at 10 a.m. between Lesvos and Lemnos and flew over the Fournoi islets at 8,900 feet.

President Pavlopoulos is to visit the islets of Oinousses and Agios Eftsrayios as wells as the island of Lemnos today.

Last Sunday, President Pavlopoulos sent the message to Ankara that Greece will not hesitate to defend its borders which are also EU borders.

Ankara does not miss an opportunity to challenge Greek sovereignty in the Aegean Sea, no matter if a fisherman or the President come in areas Turkey considers as ‘disputable.’

Turkey’s provocations increased again after the failure of Cyprus talks in Crans-Montana and the start of drilling for natural gas in Block 11 off Cyprus.