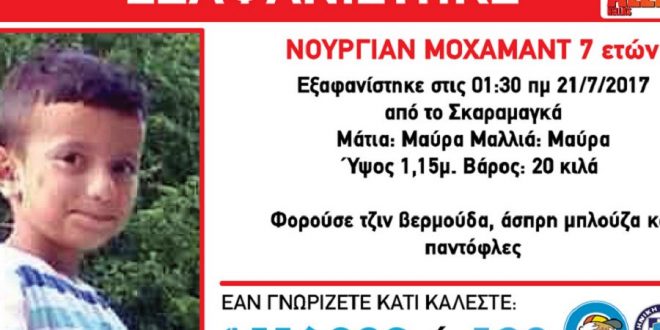 Greek authorities arrested the parents of the 7-year-old missing refugee boy who was found dead in the sea area of Skaramagas on Friday night. The body of the boy was found near the dock of Skaramaga, close to the refugee camp where the family from Syria has been staying.

7-year-old Nuryian Mohammed had reportedly gone missing at 1:30 a.m. on Friday (July 21. 2017). The parents and other refugee were searching for the missing boy all night. The father reported it to police in the morning.

“The parents found the boy’s body in the sea,” private ANT1 TV reported on its Saturday noon news.

Authorities arrested the parents on Saturday morning “for having exposed the underage child into danger.” They were taken to prosecutor in Athens. As the body was found in the sea, the Coast Guard and the port authorities of Elefsina deal with the case.

According to media, the parents were not able to explain how the child ‘landed’ in the sea.  Both are in bad psychological condition.

First examination show that the boy was drowned.

An autopsy is to be conducted on Monday.

An Amber alert was issued for the child.