Breaking News
Home / News / Politics / Greece / Tsipras on Varoufakis’ Plan B “It was so vague, it wasn’t worth even talking about it” 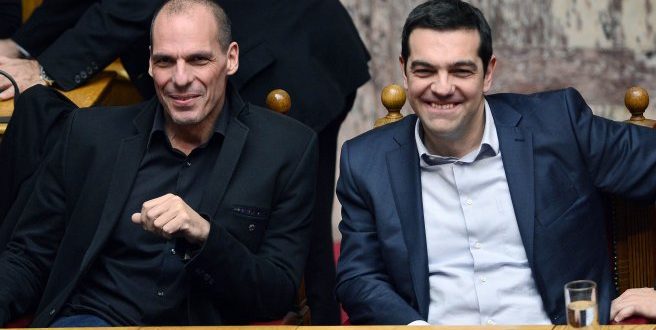 Tsipras on Varoufakis’ Plan B “It was so vague, it wasn’t worth even talking about it”

“I have made mistake, big mistakes,” Greek prime Minister Alexis Tsipras told UK daily The Guardian, his biggest error may have been “the choice of people in key posts”.  For the first time ever since Yanis Varoufakis left the government in summer 2015 and kept sharply criticizing Tsipras on his choices when the Greek crisis was at its peak with the European lenders, the Greek Prime Minister personally responds to the allegations by his ex finance minister. Tsipras interview comes after a political firestorm broke out over the weekend, when Greek politicians discovered Varoufakis’ book “Adults in the Room.”

In a long exclusive interview to The Guardian,  Tsipras picks up the Varoufakis’ challenge in public and says about the famous parallel currency and contingency plan to exit the eurozone.

“Yanis is trying to write history in a different way. […] his Plan B was so vague, it wasn’t worth the trouble of even talking about. It was simply weak and ineffective.”

Tsipras said that while the Syriza government’s original strategy was one of collision politics – “in line with our mandate” – quitting the single currency, and by extension the EU, was never in question, even in the white heat of crisis when Athens was days away from default.

“Leave Europe and go where … to another galaxy?”

Grexit would have amounted to acceptance of the “punishment plan” concocted by Schäuble that foresaw Athens taking “time out” of the bloc.

“I have made mistakes … big mistakes,” Tsipras said adding that his biggest error may have been “the choice of people in key posts”.

Varoufakis was the right choice for an initial strategy of “collision politics”, Tsipras said among others.,

Other excerpts from Tsipras’ interview

About the 3. bailout agreement:

Compromise was the only option, says Tsipras, likening the measures that came with it to a ghastly medicine endured when life is at stake. “You hold your nose, you take it … You know that there is no other way … because you have tried everything else to survive, to stay alive.”

Full Tsipras interview in The Guardian

PS In Greek, we call such exchange of ‘political argumentation’ between the former comrades Varoufakis-Tsipras as Xekatiniasma. It describes the exchange of petty descriptions. Varoufakis has been attacking Tsipras and other government officials ever since he left the government, the government uses every possible opportunity to downgrade Varoufakis. The term xekatiniazw is close to British term ‘slanging match‘ in the sense of angry quarrel with uncontrolled insults but not so harsh. The divorce of the former partners is carried out in a more civilized language. It looks like the most painful divorce in the Greek political history though.