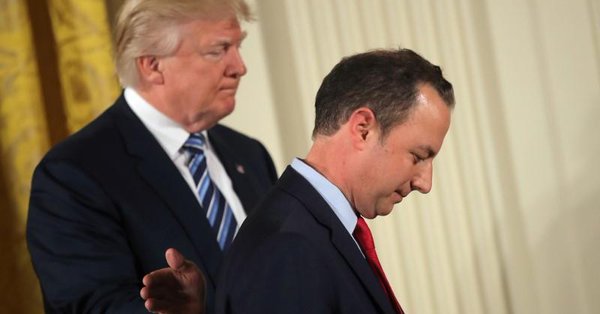 US President Donal Trump announced on Twitter that he fired the White House Chief of Staff Reince Priebus. He replaced him with retired General John F. Kelly. Appointing Priebus to this powerful position had made Greeks and Greek-Americans proud as the 45-year-old has Greek roots from his mother side.

I am pleased to inform you that I have just named General/Secretary John F Kelly as White House Chief of Staff. He is a Great American….

…and a Great Leader. John has also done a spectacular job at Homeland Security. He has been a true star of my Administration

I would like to thank Reince Priebus for his service and dedication to his country. We accomplished a lot together and I am proud of him!

It has been long speculated that Priebus could be on his way out of the White House. In May, one longtime friend of Trump’s had even publicly called for the chief of staff to be fired. It had also been rumored that Priebus was feuding with other top officials in Trump administration.

In his interview with the New Yorker, a hysterical Scaramucci used an impressive vulgar language that shocked.

I sometimes use colorful language. I will refrain in this arena but not give up the passionate fight for @realDonaldTrump's agenda. #MAGA

He later claimed it was not an interview but just a chat with a reporter.

I made a mistake in trusting in a reporter. It won't happen again.

Trump appeared to be the driving force behind a stunning public feud between Scaramucci and Priebus, wrote Associated Press.

On Thursday morning, as Republican senators began the most crucial day in their efforts to pass a health care bill [to replace ObamaCare], Scaramucci spent the morning on CNN accusing Priebus of orchestrating leaks.

“The fish stinks from the head down,” Scaramucci declared in an interview he said was authorized by the president.

Hours later, as Republican leaders tried to cobble together votes for a scaled back bill, the New Yorker published a vulgar screed from Scaramucci aimed at both Priebus and Steve Bannon, Trump’s senior adviser. There was no condemnation from the president.

One more speculation was claiming that once out of the White House, Reince Priebus could be named ambassador to Greece.

Greeks and Greek-Americans had cheered when Reince Priebus was appointed to the powerful position and be practically the right hand of President Trump.

Many hoped that Priebus would serve as a bridge and could persuade President Donald Trump to lend a helping hand to in-debted Greece.

After Flynn and Deare, Priebus is the third person in Trump administration to be fired within six months. PS according to some US media, Scaramucci’s wife filed for a divorce. She got probably fed up with the F-word….!?