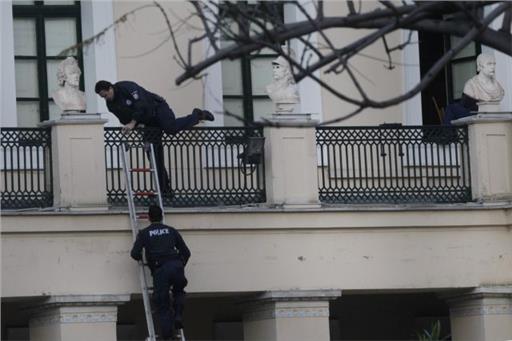 The vote was conducted by roll call in Parliament Wednesday following a request by main New Democracy opposition that has fought the reforms saying they will plunge universities into the past.

Breaking ranks with the coalition, ANEL MP Dimitris Kammenos, who was recently appointed deputy speaker of the House, voted against Article 3 of the bill which essentially reinstates an asylum law scrapped by the previous conservative administration.

The new measures are designed to strengthen the role of students in the management of universities while making it more difficult for police to enter university grounds.

Another provision foresees 40 percent of students enrolled in postgraduate programs being exempt from having to pay university and college fees.

The bill concerns changes to article 3 on academic freedoms, article 15 on the election of rectors and deputy rectors and articles 32, 34, 36 on the process of setting up, selecting students and teachers in a master’s degree. It also includes an amendment of the Justice ministry on the Code of Notaries and the legal framework surrounding their associations.

Furious about the restoration of the university asylum New Democracy said it will scrap the legislation once it comes to power.

Prime Minister Alexis Tsipras defended the bill saying  “we must safeguard the free access to all ideas and expressions in the universities with respect to the democratic procedures.”

Dialogue is not possible when police can intervene, Tsipras implied and added “We are not afraid of the students’ movement. We restore the asylum for the free access to all ideas in the universities provided they respect the democratic freedoms.”

The asylum in Greek universities was scrapped in summer 2011 trough a legislation of Education Minister Anna Diamantopoulou under Papandreou government. The idea behind the legislation was apparently the  PASOK government fear that students would up-rise due to the strict austerity measures and the bailout.

Referring to the post-graduate courses fees, Tsipras said that the government puts a halt to the very high tuition fees that increase the income of a small group of professors and on the other hand exclude the possibility to students with low family income to attend the courses. No student will be excluded if he can’t pay.