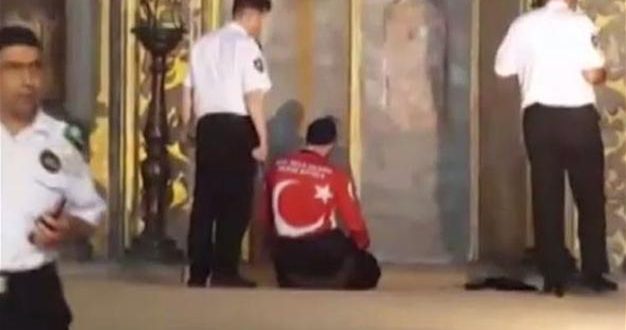 August 2, 2017 Turkey-GR Comments Off on Two men perform prayers inside Hagia Sophia to protest its closure to Muslim worship 353 Views

Two people have performed prayers inside Istanbul’s Hagia Sophia in order to protest its closure to prayers, comparing it to measures taken by Israeli forces at the al-Aqsa mosque in Jerusalem.

The two identified as Halil Akyaman and Mahmut Alan arrived at the museum and suddenly began to pray inside.

Security forces waited for them to finish praying and then immediately moved them away from the museum.

The duo said they had prayed to protest the museum’s closure to prayers.

“Israel entered the al-Aqsa Mosque at 3 a.m. yesterday. [The Hagia Sophia] is not a museum but a mosque. There is a lock clamped on Muslims. [Ottoman] Sultan Mehmed the Conqueror conquered it. This is a mosque and I am performing my prayers. [Israelis] entering the al-Aqsa Mosque in combat boots and people entering [the Hagia Sophia] with shoes are the same thing,” one of the men reportedly said.

The incident occurred in front of stunning tourists.

Greek media reported about the incident as “Turkish provocation” as everybody can recall how President Recep Tayyip Erdogan opened the Holy Church of Orthodox Christianity for Muslim prayers and Koran recitations during the Ramadan.

PS I suppose, the Turkish policemen and guards waited for the two to finish their prayers because they thought Erdogan might have sent them…. And who in Turkey want to mess with the President nowadays.

A historic decision: The United States has decided to lift the long-standing arms embargo on …