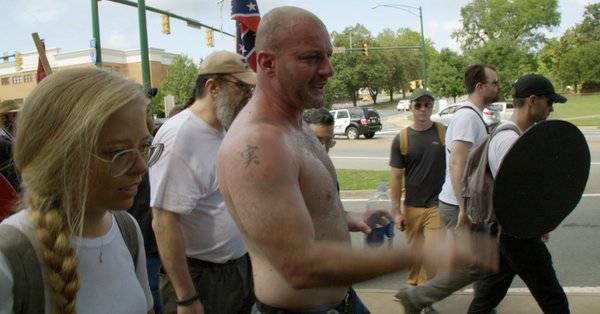 Harrowing coalition: US white supremacists ally with the Greek neo-nazis of Golden Dawn

August 17, 2017 Greece, Politics Comments Off on Harrowing coalition: US white supremacists ally with the Greek neo-nazis of Golden Dawn 2,724 Views

A harrowing alliance. US white supremacists and Greek neo-nazis Golden Dawn. In an interview to network Vice, US neo-fascist Matthew Heimbach said  that when it comes to his organization tactics “Primarily, we follow the European example of Golden Dawn.” He described the GD as one of “the vanguard nationalist organization in the world.”

Matthew Heimback, 26, has risen quickly to prominence in white supremacist circles after he worked for weeks to help promote the Unite the Right rally in Charlottesville last Saturday.

American neo-fascist Matthew Heimbach, who's at Unite the Right today, given a glowing profile in Greek Golden Dawn newspaper pic.twitter.com/7rG9xHMcJ7

In the article, he is cited as saying “The American South is still resisting.” In the interview, Heimbach claimed among others  that “The European people regain their identity,” after years of being terrorized and blamed for every  suffering. “Now the climate is being reversed. In Michaloliakos’ Greece, in Putin’s Russia and in Trump’s America, people choose leaders who will give them hope,” the white supremacist said.

One of the organizers of #Charlottesville #UniteTheRight Matthew Heimbach with head of Greek #neonazi Golden Dawn#antinazi #antifa pic.twitter.com/r7z1L9JjRY

He was seen in a picture together with GD leader, Nikos Michaloliakos, in the party offices in Athens(?).

Matthew Heimbach is founder and chairman of  the Traditionalist Worker Party. His organization is classified as ‘”hate group.”

He believes “white genocide” is danger of occurring in the United States. He sees America’s diversity as a threat and believes that the country should be carved into “ethnostates” with each race receiving its own autonomous region.

He and his group are also anti-Semitic and believe a “Jewish power structure” controls the world. They deny the Holocaust, admire Adolf Hitler and Ku Klux Klan leader David Duke and look up to strongmen such as Russia’s Vladimir Putin and Syria’s Bashar al-Assad.

Heimbach played an important role in a key event that has garnered international attention and resulted in the death of Heather Heyer, 32, of Charlottesville, who was killed when a car driven by James Alex Fields Jr., 20, of the Toledo suburb of Maumee, Ohio, sped into a crowd of counter protesters.

Two Virginia State Police officers who were monitoring the protest died when the helicopter they were flying in crashed.

In a statement, Golden Dawn praised the rally in Charlottesville describing it as a “dynamic demonstration against illegal immigration.” The Greek neo-Nazis whose majority of MPs are legally and judicially under investigation and trial for forming a criminal organization, accused anti-fascist protesters of seeking to break it up “with the classic method of holding a counter-demonstration.”

“Fully equipped anarcholeftists attacked the peaceful demonstration of the American Patriots but the outcome of events was not what they expected,” GD wrote.

Vice report  “Charlottesville: Race and Terror” – Heimbach about GD is at 10:40 min.

PS I remember US white supremacists websites were mocking Golden Dawn MPs back in 2012. Apparently, the fascist ideology against what they call “alt-left” united the Greeks and the Americans in an unholy alliance of a bunch of white ultra-nationalists, alt-righters, neo-Nazis and Kuk Klux Klan. #creepy.