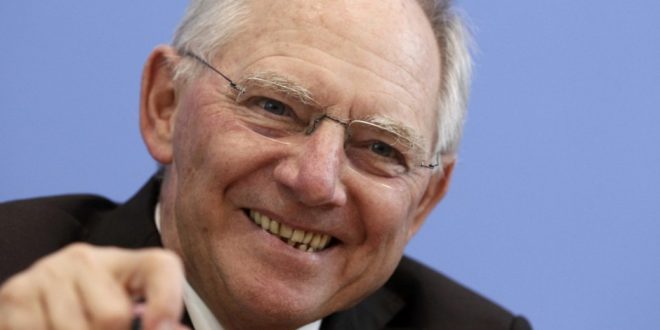 German finance minister Wolfgang Schaeuble was always against a common European debt, against Eurobonds and new support programs for the European South. He seems to have made a U-turn. As expected not without strict measures and concessions.

According to German daily BILD, Schaeuble is working on a proposal that would allow southern euro zone countries to tap into the single currency bloc’s bailout fund European Stability Mechanism (ESM) to boost investments during recession times.

BILD notes that the plan is: The euro rescue umbrella ESM (80 billion euro / 22 billion of German tax money) to become a kind of additional EU budget. States should no longer only be allowed to tap it if they are broke. But also to boost the economy in bad times, and in the event of natural disasters!

Then Germany would make tax money available through the back door in order to help Italy, France, and others in order to grow more economically. It is unclear whether and when these states would have to repay the money.

In return, Schaeuble wants to secure greater influence on the budgets (debt and financial policy) of the other euro countries through the ESM.

If the unsourced report is confirmed, “the plan would mark a major change of policy for Schaeuble who had until recently always opposed transfers from richer euro zone countries to poorer members like Greece,” Reuters notes adding that the Finance Ministry was not immediately available to comment on the report.

Germany is the biggest contributor to the European Stability Mechanism, the euro zone’s bailout fund.

Bild said Schaeuble intended to make the proposal after Germany’s Sept.24 election, which his conservatives led by Chancellor Angela Merkel are expected to win.

In exchange for more flexible access to the ESM, Schaeuble wants the fund to have more say over national debt and budgets.

Bild added that the proposal was a goodwill gesture towards French President Emmanuel Macron who has vowed to work with Merkel on a roadmap for closer euro zone integration.

Schaeuble said earlier this year that he shared Macron’s view that financial transfers from richer to poorer states are necessary within the euro zone.

A joint euro zone budget and a common finance minister are among ideas for deeper European Union integration around the single currency after Britain leaves the EU in 2019. Completing a banking union has also been proposed.

According to Reuters, “Schaeuble is loathed in many southern euro zone countries and especially in Greece, for insisting on tough austerity measures in exchange for bailout funds during the bloc’s debt crisis that started seven years ago.”

Schaeuble’s spokesman partly dismissed the Bild report saying “we will not release member-states form their own responsibility. All we are discussing about the is role of ESM in crisis prevention within the eurozone.”

PS Schaeuble would not be Schaeuble if he would allow the eurozone South to tap the ESM without the total control of their national budgets. In my village we use to call this type of guys neurotics, control freaks and obsessed.