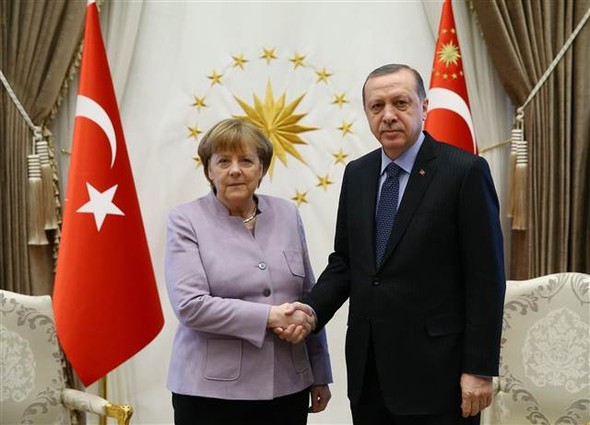 German Chancellor Angela Merkel informed European Commission President Jean-Claude Juncker on Aug. 30 that her country would veto an update of the Customs Union agreement with Turkey, daily Hürriyet has learned.

One day before their meetings in Berlin, Merkel announced they will convey the German government’s position to Juncker regarding the Customs Union issue.

Germany has issued new travel advice for its citizens and is blocking talks on expanding the EU Customs Union with Turkey.

“I do not see a mandate to expand the Customs Union in the current circumstances,” Merkel said.

“Our demand is very clear: That the people who have been arrested there are released,” she said.
Yücel, a German-Turkish dual national, was arrested on Feb. 27 on charges of “making propaganda in support of a terrorist organization” and “inciting the public to violence,” after initially being detained on Feb. 14.

Yücel, who faces up to 10.5 years in jail if convicted, denies the charges.

The German government has demanded Yücel’s swift release, as well as the release of other German citizens detained in Turkey.

The Customs Union between Turkey and the bloc entered into force on Dec. 31, 1995. It covers all industrial goods, but does not address agriculture (except processed agricultural products), services or public procurement right now.

The European Commission had stated on Dec. 21, 2016 that it had asked the European Council for a mandate to launch talks with Turkey to modernize the existing EU-Turkey Customs Union.

⇒ Read: Bitter row between Germany and Turkey is getting tenser

The upgrade of the agreement forms a central part of efforts to deepen relations in key areas of joint interest identified at the EU-Turkey Summit on Nov. 29, 2015 and in the EU-Turkey statement on March 18, 2016.August/31/2017. [hurriyetdailynews]