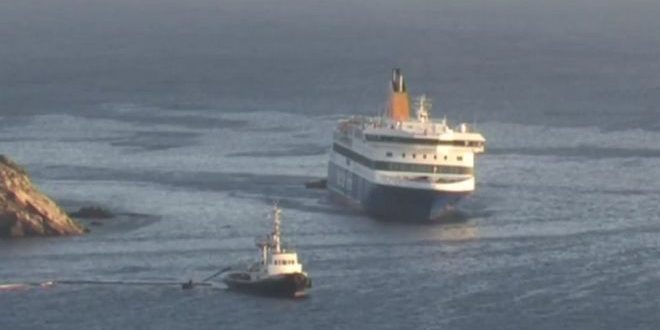 Towboats managed to detach the largest part of the passenger ferry BLUE STAR PATMOS from the reef. The ferry ran aground just before entering the port of Ios in the early morning hours of Wednesday.

However the bow remained stuck and a new operation took place on Saturday by a Dutch company which has undertaken the salvage operation.

Diver were expected to deliver a new assessment of the vessel’s situation.

According to the media information, a large part of  Blue Star Patmos has been detached, while the bow remained stuck on the reef.  The same information indicates that the first image shows that the ship has suffered multiple breaches mainly in the ballast tank that is watertight and does not affect the buoyancy of the ship.

For precautionary reasons, the Marine Ministry is expected to request for fuel pumping before operation to seal the breaches start.

With the assistance of tug boats, the Blue Star Patmos is expected to sail to the nearest shipyard for repair.

The engine room as well as the propellers of the ferry are intact. Two rows of floating dams have been attacked to the ferry for preventive purposes.

A clear picture of the damage will be available as soon as the whole ferry has been pulled out.

The Blue Star Patmos ran aground at 01:45 local time August 30th 2017 while entering the harbor gulf of Ios island in the Aegean Sea. On board were 205 passengers,  87 crew members, several private vehicles and transport trucks.

“The vessel suffered hull breach with ensuing water ingress, which said to be small and under control,” initial reports said.

Passengers and half of the crew were evacuated and were transferred to Ios by shuttle vessels.

Passengers described the dramatic moments when the evacuation sirens went on, and how they were transferred to safety in the middle of the night while winds were blowing with intensity of 5 Beaufort.

Nobody was injured or harmed.