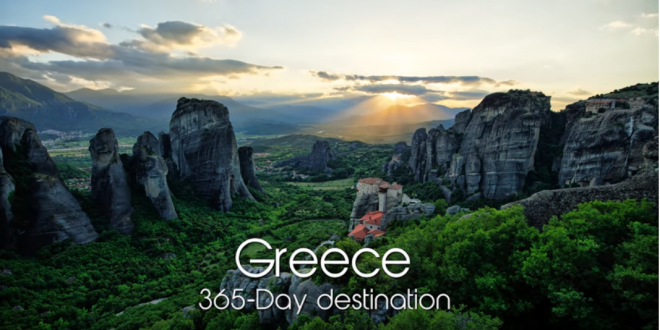 “Bustling cities, small traditional villages, breathtaking nature, rich culture, imposing archaeological sites, mesmerising islands, savoury culinary treats and recipes form a fascinating destination. Enjoy Greece all year round, as each season has something special to offer.” This is the message Greece sends to the world in an effort to extend the tourist season all over the year.

Greece’s treasuries, the images, the sounds and the colors of Greece in the four seasons of the year are being captured in a  video published by the Greek National Tourism Organization (GNTO).

The GNTO has submitted the video showcasing Greece’s natural, historical and cultural assets in the second international video competition being run by the United Nations World Tourism Organization (UNWTO).

The video will be presented at the 22nd session of the UNWTO’s general assembly, taking place September 11-16 in Chengdu, China, and attended by delegates from more than 150 countries.

The winners of each of the organization’s six regional commissions – Africa, the Americas, East Asia and the Pacific, Europe, the Middle East and South Asia – will be selected by a panel comprising the commissions’ chiefs, with Greece hoping to clinch the top spot for Europe.

The competition further includes the People’s Choice Award, where members of the public are invited to vote for their favorite video in an online poll.

“Greece – A 365-Day Destination” will also be screened at the International Tourism Film Festival in Zagreb, running September 13-16, while it will also participate in 16 specialized festival around the world over the course of the year.

The competition will award the best video of touristic promotion, thus recognizing the great importance of multimedia in the marketing of tourist destinations.