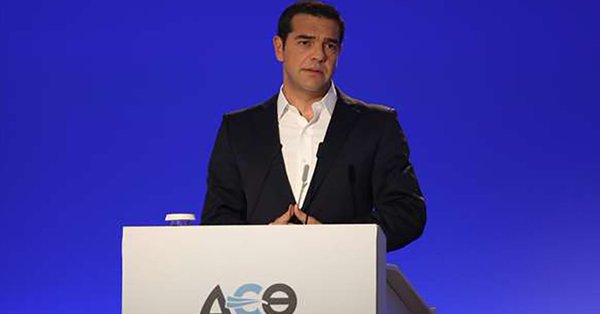 Tsipras in Deth2017: We organize the future. From Grexit to Grinvest

Greek Prime Minister Alexis Tsipras said on Saturday that the country’s Grexit status had changed into Grinvest as it was now attracting investors in droves. Inaugurating the 82nd International Fair of Thessaloniki (TIF), he was not able to announce measures to benefit the society – as Greek prime ministers usually do at the inauguration of TIF.

“In 2016, direct foreign investments were the highest in the last 10 years and in 2017 further improvement is expected”, Tsipras said in his speech.

“A French businessman who came to Greece with my French counterpart this week approached me and told me that we have managed to transform Grexit to Grinvest not only for the French but for the rest of Europe,” he said.

“The heightened interest for investments in Greece is not something that happened by chance,” he said recalling recent visits by French President Emmanuel Macron and Russian leader Vladimir Putin.

But he conceded that signs of economic growth had not been felt so far by the majority of Greeks.

Two years after Tsipras’s leftist government nearly crashed Greece out of the euro, and eight years after the country plunged into economic crisis, employment numbers are finally improving.

Tsipras added his administration has created around 500,000 jobs since taking over in 2015 — “a record for the last 16 years” — and expects the economy to grow by nearly 2.0 percent this year.

Tsipras voiced hope that “next year, the country will be inaugurating the International Fair of Thessaloniki without being under a suffocating bailout programme.”

He stressed the need to discuss Greece’s future and the road to growth that lies ahead in his opening remarks of the traditional Premier’s state-of-the-economy address ………….

“I will speak about tomorrow and the big bet lying ahead, the big duty of the moment that is common for everyone: To plan and organize the future for the many,” he said.

Tsipras stressed that a road towards a new growth, social structure and freedom was lying ahead, based on a new production model.

“The time has come to respond with what measures and institutions we will organize tomorrow’s Greece so that an exit from the memorandum will not signal a return to the past. We set up policies and institutions that will guarantee that Greece will not return to the past. The time has come for our youth, workers and the country to quicken their step. We will not allow a return to the Greece that went bankrupt. Our duty is to create a new Greece, of equality, meritocracy, social state, stability and trust. To create institutions that will be able to protect what we call public interest,” he said.

The premier noted that the increasing investment interest for Greece was not accidental and that the country’s image has drastically changed to the better in the last few years.

“The country’s positive outlook is now visible and acknowledged both by our partners and by international markets. We exceeded the program’s targets for primary surpluses and this strengthened our negotiating ability. The country is upgraded and is becoming a strategic partner of the most significant economic powers on the planet,” he added.

Commenting on the governmen’s initiatives to reform the country, he cited the new development law which focuses, for the first time, in supporting small- and medium-sized enterprises, adding that the restoration of confidence in the Greek economy and the revival of investment interest is also a result of the country’s regained status and international alliances. The recent official visits of French President Emmanuel Macron, U.S. President Barack Obama and Russian President Vladimir Putin along with Tsipras’ two visits to China, prove that the country is increasing its status and becoming a strategic partner of the most powerful countries on the planet. 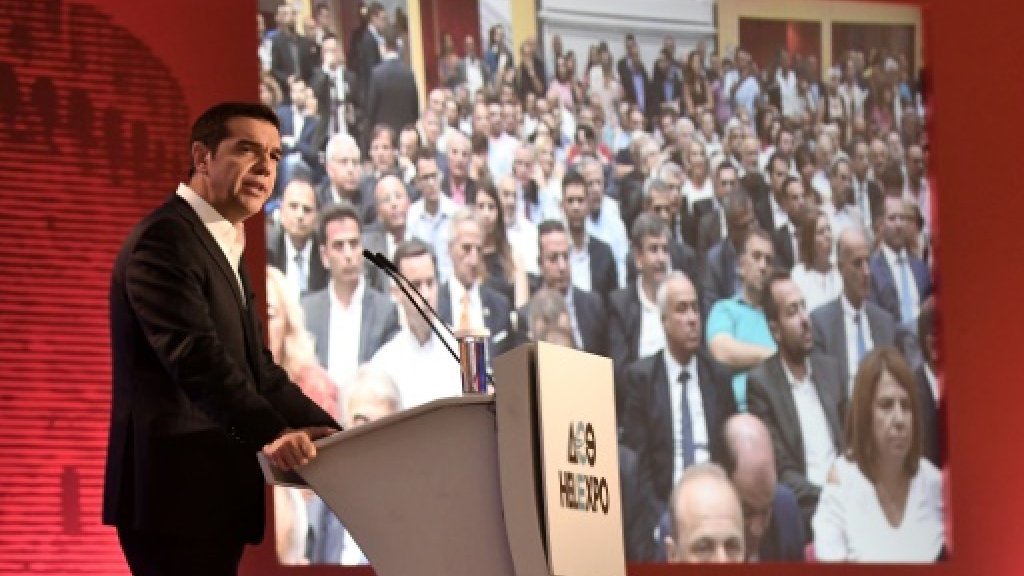 Presenting his data, he said that in 2016, foreign direct investments hit a 10-year high and that the government expects a further improvement in 2017 as FDI inflows totaled 1.4 billion euros in the first four months of the year.

“The positive economic growth rates are an excellent omen,” he continued. As part of the new development law, government authorities are evaluating around 800 new investment plans worth 2.0 billion euros, he explained, adding that a change in the climate and the restoring of confidence was the result of specific institutional interventions, the creation of a new production model and the implementation of fiscal policies.

“Greece, for the third successive year, is the top country in absorbing EU funds. This means there was an inflow of funds worth 11 billion euros in the Greek economy from 2015 onwards in the fields of energy, transport, business innovation and human resources growth,” he said.

An agreement on a medium-term program envisages 1.5 billion euros by 2020 for infrastructure in agricultural production and energy saving programs for buildings. Greece has managed to secure 2.0 billion euros from the so-called Juncker Plan through agreements with EBRD for Greek SMEs. The government is activating new funding tools which, through leverage, could activate funds up to 3.0 billion euros. “In two years, we managed to complete road works left uncompleted for decades at a huge cost for the Greek state,” he said.

Tsipras said public investments will total 1.0 billion euros in 2017, up 25 pct, adding the government’s strategic goal was to operate a public sector equally accessible to all citizens. “Our vision is [to have] a digital public sector in 2020,” he added.

The Greek premier said the government was achieving its fiscal goals and at the same time creating fiscal space to proceed with a lowering of tax burdens.

Commenting on corruption in public life, he said that the fight against vested interests, the TV licensing tender, the investigations into various “golden list” and the imposition of the relevant fines, prove the government’s will to remain steadfast to the respect for the rule of law.
He said this means that everyone should be paid according to their contribution and pay taxes according to their wages. This is done to “safeguard everyone’s right, particularly of young people, to have an equal share in the growth [expected] in the coming years.”

Turning his attention to the completion of Greece’s aid program in 2018, he mentioned the road map on debt settlement and debt sustainability which offers the certainty that “we are in a position, with a stable footing, to leave behind the trap of supervision and disastrous austerity”.
This was highlighted by the country’s first successful foray into capital markets which he argued is already “transforming hopes into certainty” that this will happen in time.

Other positive milestones were the successive upgrades of the country’s credit rating, the decline of the Greek bond spreads and an increase of economic confidence to the highest levels in recent years. Tsipras reiterated his view that only fair growth which allows all people to participate in the rights and benefits, can lead to economic growth with future.

Concerning the government’s digital policy, he said 410,000 Greeks have free satellite access to Greek TV stations around the country, while 14,500 households in 47 islands and 72,000 students enjoy high-speed internet, free or with a significant subsidy.

He also announced that the government is working to form legislative interventions to protect employees, strengthen supervisory mechanisms and redesign funding tools to support them. The government will also soon present proposals to subsidize social insurance contributions for employers agreeing to offer payroll contracts to employees.

Tsipras also said the government wants Thessaloniki to become the center of the Balkans. “We proved that our interest for Thessaloniki and Northern Greece was not just talk. My presence here will be continuous and in time very significant projects will be implemented here,” he said.

He then predicted that Greece will inaugurate the 83rd Thessaloniki International Fair free from adjustment programs and outside the strict supervision. “This is our goal and we are determined to achieve this and for the country to stand on its own feet. Next year we will be discussing about how we will all create Greece of the new era.”

Recently, European Commissioner Pierre Moscovici said that countries are free of supervision once they have paid back 75% of their debts.

PS Of course, the Prime minister could not announce measures for the society: the third review of Greek program lies ahead together with outstanding prerequisites he has to implement. One of lenders’ top priorities is to ‘review’ – i.e. cut – benefits and allowances for the vulnerable of the society, like low-pensioners and disabled.

So, let’s Grinvest, in this neoliberal paradise, where workers’ rights are not protected and the labor market trend is part-time jobs for an average of 200-300 euro, no social security burden for the employer.