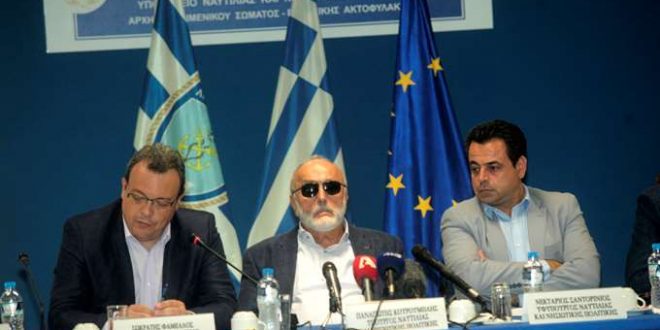 With five days delay and under the heavy attack by political parties of the Greek opposition Shipping Minister Panagiotis Kouroumblis inspected some areas affected by the oil spill in the Saronic Gulf.

In a press conference he dismissed opposition claims that the state reacted with delay to the ecological disaster flooding the sea of the Saronic Gulf, the coasts of  the island of Salaminia ans well as of Athens and Piraeus.

Kouroumblis said that the mobilization of the state mechanism was immediate, the coast guard vessels arrived within 15 minutes and dealt first with the crew rescue, the anti pollution vessel arrived at 5:30 a.m. and the floating dams and the sealing of the tanker started after 9:30 a.m.

In 25 to 30 days the clean up will have been concluded and the situation will be much different, he said.

He attributed the oil spill to the temperature drop at …night. “The cold pushes the mazut to the bottom of the sea and it leaks below the floating dams,” he said.

“Τhe situation regarding the Salamina oil spill has improved and the clean-up operation is continuing with the same intensity,” Kouroumblis said.

The minister noted that clean-up crews have managed to seal off  tanker “Agia Zoni II” that sank at 2:45 a.m. on Sunday.

“The seal off have prevented any further oil leaking into the environment,” the minister said and estimated that the fuel inside the tanker would be pumped out within the day (Thursday).

“This is a very important fact because we are controlling the source of pollution,” the minister said, adding that the ministry has mobilised all means available in the country to reduce the impact of this pollution.

Environment minister Sokratis Famellos claimed there is not an ecological disaster but just an important environmental accident that is being dealt with.

Coast guard vessels, private vessels and the anti-pollution vessel AKTAIA from the European maritime Safety Agency are operating along the coast line from Piraiki in Piraeus to Glyfada, while eight anti-pollution companies operate on the shores.

Deputy shipping minister Nektarios Santorinios said he believes “we will soon see a spectacular improvement of the situation and by the weekend we will be able to see that the biggest part of the pollution has been erased.”

“We need to seek the causes of the tanker wreck,” he added.

84 hours after the shipwreck and there is not a word in in the media about what brought the tanker to the bottom of the sea, while it was anchored and the weather conditions were fair.

I suppose, the two crew members who managed a last minute escape form the sinking tanker had no idea about what has happened.

In a parallel development, Alternate Minister for Agricultural Development Christos Tsironis, founding member of Greek Eco-Greens, has found the reasons for the shipwreck.

“A whole society is to blame for the ecological disaster and an oil dependent global economy and a tough lobby that does not allow us to invest in ways that will protect our shores,” Tsironis told media on Thursday morning.

PS I don;t know how cold gets the sea in the Saronic Gulf at night or early morning or at dawn, but it is pretty warm for a swim during the day and in the evening. Provided that one can still swim in the area.