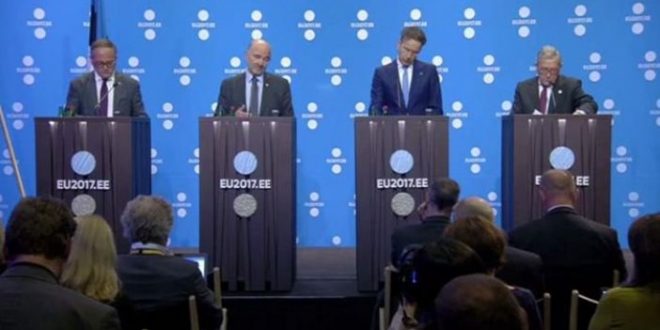 The Eurogroup in Disco Mood from the 80s

September 15, 2017 Economy Comments Off on A Eurogroup without whining about a Greek ‘something’ is half the joy… 323 Views

As if we did not have enough trouble with the oil spill, a long-time-not-seen Eurogroup meeting took place in Tallinn, Estonia, today. Greece’s lenders came together to catch up with the struggling country. Top on the agenda was the implementation of the Greek program and the third review.

According to the Eurogroup chief, Greece has recently covered a lot of ground and the Eurogroup welcomed the European Commission’s proposal for Greece’s exit from the excessive deficit procedure, which is expected to be ratified officially by the Council of General Affairs later in September.

Dijsselbloem conveyed the euro area ministers’ [???] “concerns”  about ongoing legal proceedings in the country and specifically the prosecution of former ELSTAT (Independent Statistics Authority) chief Andreas Georgiou. The independence of courts and statistics were fundamental in a modern democracy and must be safeguarded by all, he underlined.

European Commissioner Pierre Moscovici made a lengthy statement in the usual form of flower bouquets and hurray-solidarity with Greece.

In the corridors of Brussels, there is talk that Moscovici wants to sit on the Eurogroup throne, once Dijsselbloem is gone.

However, the acting Dutch finance minister is expected to continue as Eurogroup President until the end of his mandate in January.

Of course, Dijsselbloem cannot step down from his Eurogroup post before a new government is solid nailed in Germany.

He comes to Athens on September 25th, one day after the German elections.

Probably with the new orders of  Schaeuble in his luggage.

PS and then one day, we will all say: Sad to see ya go #NOT