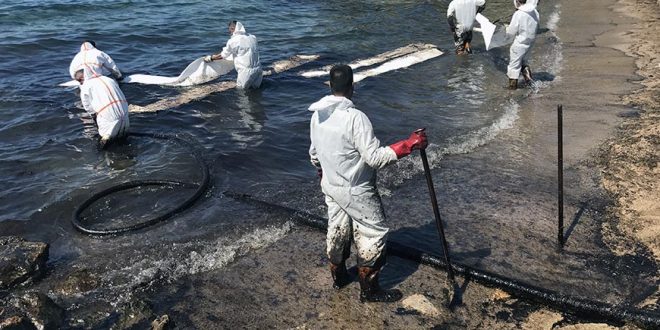 The World Wildlife Fund filed a lawsuit Monday over extensive pollution to the coastline outside Athens following the sinking of a tanker near Greece’s largest port.

The environmental group’s Greek branch filed the lawsuit in the port city of Piraeus against “anyone found responsible,” a common practice when a party that could be held legally accountable has not been identified formally.

The Agia Zoni II tanker sank Sept. 10 while anchored in calm seas and carrying 2,200 tons of fuel oil and 370 tons of marine gas oil. The ship’s cargo spilled into waters where dolphins, turtles, seals and a variety of fish and sea birds feed and live. Oil slicks have extended from the island of Salamina, near where the tanker went down, to the entire length of the Athens coast.

The World Wildlife Fund said it considered the case to be “an environmental crime deserving exemplary punishment.”

The Greek government has faced criticism for what many observers said was a slow, inadequate response that allowed leaking oil to spread along the greater Athens area’s coastline. The tanker sank very near Piraeus, the country’s largest and best-equipped port.

The government has rejected the criticism, insisting it did everything possible to contain and clean up the slick.

“The effort to tackle the pollution is a difficult affair that requires the immediate mobilization of all the responsible bodies,” Prime Minister Alexis Tsipras told his Cabinet ministers in televised comments Monday. “Already, all available counter-pollution means have been mobilized and great efforts are being made.”

Demetres Karavellas, chief executive of the World Wildlife Fund’s Greece office, said it was essential to identify where responsibility lies.

“Through a thorough analysis of the causes, we will emerge better prepared to avert or control similar accidents in the future,” Karavellas said. -via ap