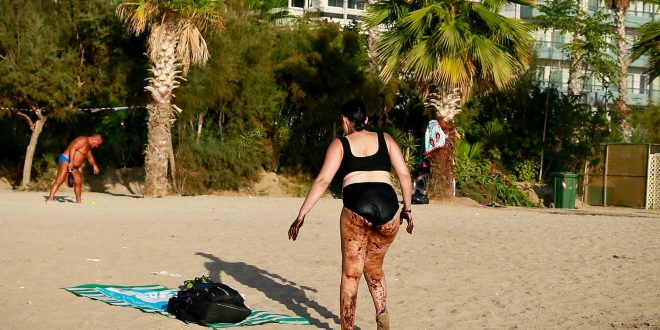 A shocking picture that has gone viral on Greek internet: A woman with legs and hands covered with black fuel oil is coming out from the sea at Batis, in Palaio Faliro, polluted with the tanker oil spill. Batis is one of the beaches in Athens Riviera affected by the tanker oil spill and where swimming has been banned by the Greek Health Ministry.

“Shock! Woman in fuel oil” is the title many media incl television channels use for this shocking picture.

The picture was shot Wednesday afternoon, September 20th, by Belgian freelance photographer Max Gyselinck who uploaded it on his Facebook account.

Some media and internet users doubted the originality of the picture and wondered why the woman went into the sea ignoring warnings and obviously visible pollution. 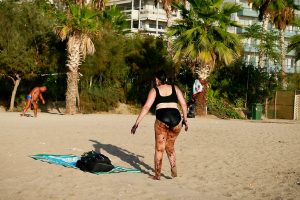 The man on the left side of the picture confirmed the incident. One of the members of the local Winter-swimmers Association at the beach told media that they warned the woman.

“We told her many times to not go for a swim but she insisted saying she frequently swims here,” Giannis Leivadas said. “She came around 5:30, left her things at the beach and went into the sea. then she came out and laid in the sun. She was rubbing her body with the towel but this thing [oil film] does not go away so simple. she got dressed and left.”

Pointing at the oil traces at the beach, the man added that they were surprised as they warn everybody but “some won’t listen. She maybe didn’t see the oil…”

Fact is that she did see and feel the oil waste once she walked into the water and she did not dare to enjoy her planned swim.

In an interview with a Greek TV Channel, the photographer said the woman told him that the sea was fine but she got the tar when she sat at the pebbles right there where the sea meets the shore.

Two days ago, the Health Ministry renew the swimming ban on several beaches all along from Salamina to Glyfada, while efforts to clean up the sea and the beaches are continuing.

However, more and more people dare to go to the beaches where they think pollution is under control. In a report of Skai TV, swimmers were spotted in Kalamaki beach. Majority of them said they are elderly swimmers who go every morning for a swim all through the year. “When we were kids, they used to rub us with fuel,” one man said. Several decades ago, fuel (petroleum) and its byproducts were used as a remedy in Greek households against cold and other acing ailments.

Loaded with 2,550 tones of fuel oil, tanker Agia Zoni II sank in the early morning hours of Sunday, Sept 9th 2017. Despite efforts of the Coast Guard and the owner to limit the oil spill, west winds spread it across in the north of the Saronic Gulf, polluting the famous beaches of Piraeus and south Athens and causing an ecological disaster in the area with big economic impact for the local economy.