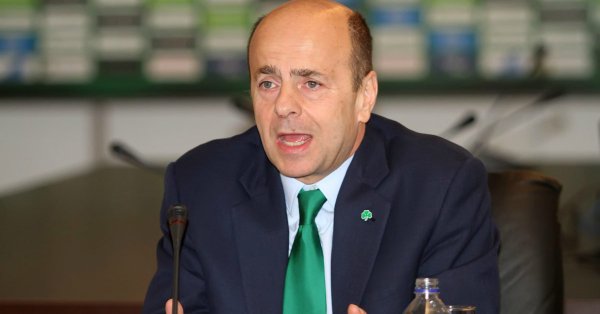 Panathinaikos owner Yiannis Alafouzos announced on Thursday he is leaving the club and is asking for any wealthy members of the Greens’ fan base to take over in this difficult moment for the biggest soccer club in Greece’s capital.

The 60-year-old shipping and media magnate, the club’s major shareholder, has decided to end his association with the Athens giants after a five-and-a-half-year spell, a move which leaves the team in financial limbo and risking relegation.

“After taking the initiative to save Panathinaikos from the brink of disaster by creating the Panathinaikos Alliance in 2012, I have invested 42 million euros out of my own pocket,” said Alafouzos via a written statement broadcast via the TV channel he owns, Skai.

“Today our club is once again at a tipping point. For me personally it is impossible, both from a psychological and economic point of view, to continue to maintain and manage the team,” he said adding:

“I had the romantic fallacy that by setting up a healthy team without any relations behind the scenes I could help change the Greek reality. I was wrong. The systems and the mentalities that prevent our country from having a normal European soccer are deeply rooted.

Alafouzos asked fans to forgive him for “letting them down and for being unable to shoulder the responsibility any longer.”

The news will come as a massive blow for PAO fans, with the clubs top flight status now under a cloud if no new investor is found immediately.

With reported debts of up to 50 million euros and no white knight investors or prospective owner lined up to replace him, the club is in real danger of having to file for bankruptcy.

This would mean relegation from the SuperLeague to Greece’s third tier and starting again from scratch, just like AEK Athens, who are now back in the top flight and in European competition, did in 2013.

Alafouzos did state that he was prepared to inject further cash to help keep the club liquid for a short period until (hopefully) a new owner or investor is found.

He said: “I am prepared to honor up my commitments up to a maximum of 20 million euro. This is the maximum I can do; I have given what I could and have tried to do the best I can. But here is where I have to draw the line and stop.”

Alafouzos came into the club on a wave of optimism in May 2012, founding the Panathinaikos Alliance organization including players and fans to take a majority stake in the club.

In September 2012 he was elected president so that the club could restructure and consolidate.

It is now the worst case scenario envisaged by PAO fans when Alafouzos and Dimitris Giannakopoulos, owner of the basketball team, failed to reach an agreement on a takeover deal a few days ago.

This summer Panathinaikos was forced to sell some of its key players such as Marcus Berg, Sebastian Leto, Zeca, Victor Klonaridis etc. and the team is currently languishing at the 11th spot of the Super League table, having also been eliminated from Europe.

Still, Alafouzos will be credited with saving the Greens from going bankrupt in 2012 and preventing a fate similar to AEK’s relegation to the third division.

According to unconfirmed reports in Greek media, Panathinaikos is considering to sell captain Dimitris Kourbelis, believing that raising  5million euros was possible.

Panathinaikos – or simply PAO – is one of the oldest football clubs in Greece, it was founded in 1908.