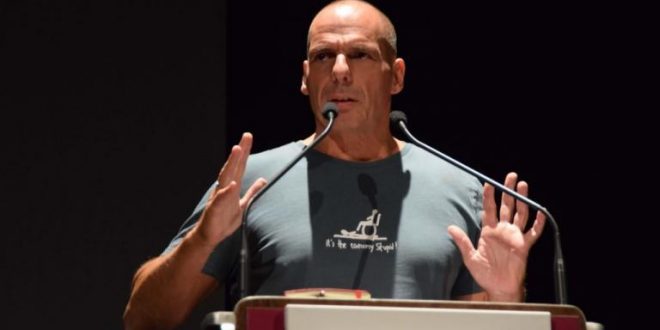 Monday evening in Patras. One day after the German elections. Scenarios about the removal of Wolfgang Schaeuble from the finance ministry circulate in full speed. Former finance minister Yanis Varoufakis speaks in front of an audience that came at an event organized by the pan-European political movement he had founded, the DIEM25.

He presents his plan about a “Greek new deal”. He targets those Greeks who voted NO in Referendum of 2015 and were bitterly disappointed and frustrated when the government ignored their vote. 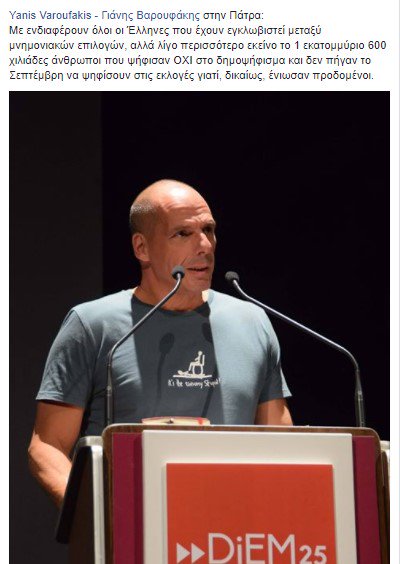 Yanis Varoufakis wears a t-shirt with a bold message. It is devoted to his former colleague and foe Wolfgang Schaeuble. 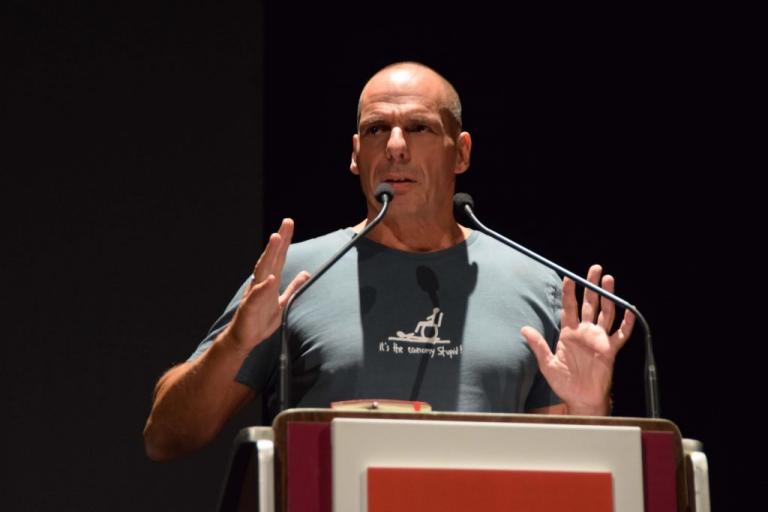 The icon on the t-shirt shows a man on a wheelchair rolling over another man laying on the floor. The script reads “It’s the economy stupid!”

The phrase was used by Schaeuble against Prime Minister Alexis Tsipras during a lenders’ conference about the implementation of the Greek Agreement in Davos in January 2016.

In an article posted on his website on Thursday, Varoufakis correctly notes that “Schaeuble goes but Schaeublelism stays?

“Wolfgang Schaeuble may have left the Federal Ministry of Finance but his campaign to use the euro crisis to turn the eurozone into a Iron Cage of Austerity (the very opposite of a democratic federation) lives and reigns.

The rise of FDP, the Liberal Democrats, ensures that Dr. Schaeuble’s retirement will not overturn the policies with which he did everything possible that the eurozone will not become a viable macro-economy” Varoufakis writes among others.

Describing the FDP as a party that is more Schaeuble than Schaeuble himself, Varoufakis notes that the FDP will continue Schaeuble’s line of “keeping the eurozone in a state of a permanent (controlled) crisis that operates as a discipline tool for the countries in deficit -especially France.”

PS To tell you the truth I find a touch of tastelessness on the t-shirt icon. However, if one keeps in mind the wall Schaebule built around the eurozone so that Varoufakis could smash his head every time he opened the eurogroup door, all I can say is:

Revenge is a dish best served cold – even if Varoufakis eats it a hit below the belt.

Using somebody’s disability to send a ‘powerful’ (?) political and economic message? Sorry, that’s a no-no, for me. I personally wouldn’t dare. But I’m not …Yanis.